Supporting Maine's dairy farmers for the love of cheese

Originally published in the Portland Phoenix on January 3, 2014 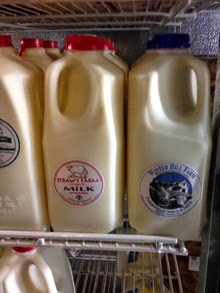 Maine-made cheese is having a moment. The Maine cheese industry is one of the fastest growing in
the country and produces award-winning varieties. While we don’t make near as much as cheese-loving states like Wisconsin and Vermont, Maine has 73 licensed cheese makers today, up from ten a decade ago. Thanks to like prominence of local cheese at retailers like the Portland Farmers’ Market, K. Horton’s Specialty Foods, Rosemont Market, and Whole Foods, curd-loving customers are familiar with local creameries and cheese styles like never before.

Whether it ends up buttery, crumbly, or tangy, all cheese starts out as milk. Maine Cheese Guild President Eric Rector attributes the success of the cheese industry to its high-quality founding ingredient. “Maine produces some of the best milk in the world, in my opinion,” Rector says. Unfortunately, the story of the Maine dairy industry isn’t as rosy as that of cheese. Today, Maine has just under 300 dairy farms, down from 500 in 2000. According to production reports from the Maine Milk Commission, the state’s number of dairy farms decreases every month. Dairy farmers have a hard time making a profit off of fluid milk and are increasingly retiring or selling their cows in favor of more profitable types of farming. A convoluted pricing system created in 1935 determines dairy farmers’ profits. Large dairy farms sell their milk to processors and are paid at a rate that is determined monthly by the state. At times, these payments are not enough to cover even the cost of production.

Smaller operations can fetch a higher price for their product by processing and bottling it themselves. At Winter Hill Farm in Freeport, farmers Steve Burger and Sarah Wiederkehr host a herd of heritage breed Randall cattle. Burger and Wiederkehr purchased the farm from a couple looking to retire and were attracted to the rare breed of cows. Randall cows used to be found on many small family farms in New England, since they are an all-purpose meat, dairy, and draft animal. Burger and Wiederkehr milk eight to nine cows of their herd of 20 and sell raw milk, yogurt, and cheese. Selling their milk at farmers’ markets helps Winter Hill Farm to get a higher price for their product than if they sold to one of the state’s dairy processors.

Smaller dairy farmers like those at Winter Hill Farm frequently choose to diversify their operation by making cheese from their animals’ milk. Cheese sells for a much higher price per pound than the milk itself does. “Particularly if you’re [a smaller farm], you need another outlet to sell to because with dairy prices and the way they fluctuate, cheese making sales provide stability,” says Whole Foods Market’s specialty cheese buyer Shannon Tallman. But animal products like milk and meat are often the last holdout for many locavores. The cost of these products from smaller producers can simply be cost-prohibitive.

Fortunately, there are a multitude of ways to support the industry that produces the milk used in your favorite cheeses. Buying milk that’s processed in Maine helps our dairy farmers too. The three Maine milk processors (Oakhurst, Hood, and Houlton Dairy) pay into a fund that helps to cover dairy farmers’ production costs when milk prices do not. Look for processing plant number 23 on the packaging to indicate that that milk was processed in Maine (see moomilkco.com/got-maine-milk for more information). Consumer support will help strengthen Maine’s dairy industry whether that milk ends up in your cereal bowl or on your cheese plate.