Habitat for Humanity of Greater Portland had the grand reopening of their ReStore on Saturday and four food trucks were in attendance, ready to feed hungry shoppers. I went to the opening ceremony to support Roomie A. and boyfriend A. and of course, to check out the food trucks.

The ReStore sells new and used building materials as the fundraising arm of Habitat for Humanity. The organization had outgrown its previous spot in Morrill's corner, and now they're in a spot three times as big out at Riverside and Warren Ave. They'll raise more money in a bigger warehouse and are perfectly positioned in that commercial corner of Portland to attract contractors and people shopping for home improvement projects. Urban Sugar Mobile Cafe, El Corazon, Gusto's Italians, and Wicked Good food trucks attended the opening day festivities. Food trucks are now legally allowed to cluster, thanks to the recent changes in the city's legislation. Hopefully food trucks will continue to cluster at the ReStore; the dining options are otherwise a little bleak out in this part of town.

I was excited to try Urban Sugar Mobile Cafe. I've been following them online and their various facebook posts have been torturing me with pictures of hot donuts. After the speeches finished, the ribbon was cut, and the store doors opened, I turned on my heel and made a beeline for the donut truck. 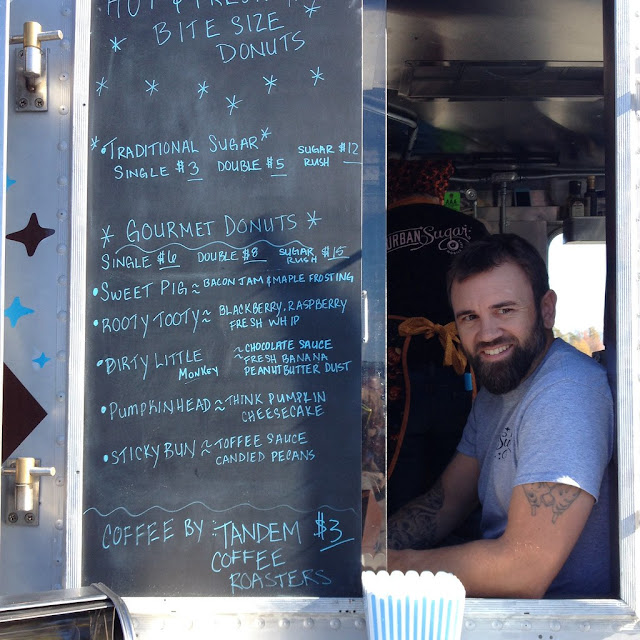 Their fried mini donuts come in a single (6) or double (12) order of one flavor or a sugar rush, a pizza box full of donuts, with up to 2 flavors. Although momentarily tempted by the "sticky bun" flavor, I pretty quickly committed to "sweet pig," topped with bacon jam and maple frosting.

The maple frosting piped on top of the hot donuts quickly started melting and mixing with the bacon jam - which I assumed was just like candied bacon or something. But a few bites revealed that the jam also contained onions, creating a sweet and savory mix. The hot crunchy donuts, cool maple frosting, and salty bacon all mixed together was pretty fantastic. I also sampled the "rooty tooty," topped with fresh berries and whipped cream and the sticky bun flavor. Both good, but I loved the messy, decadent "sweet pig" the most.

Flavors change daily and they frequently have some fantastic sounding savory donuts if sweet overload isn't your thing. They also serve Tandem coffee to balance the sweet.

Find this truck before the end of the year, as they head to Sugarloaf for the winter!