I've noticed that people in Portland love to complain about our lack of options in a particular genre of food. Like, "we may have over 300 restaurants, but there's no good [blank] food in Portland." Usually it's Chinese, but I've also heard the charge leveled at late night, Italian, and barbecue. (I'm not saying it's not true, I'm just saying it's a frequent topic of conversation.)

Well, Jay Villani of Local 188, Sonny's and Bunker Brewing and his friends are here to change the barbecue part. Salvage BBQ is located on Congress St. in the West End in the old Architectural Salvage building, which has sat empty for years. I have always admired the space and wanted to go inside, so I was happy to see this restaurant developing. Apparently Villani et al traveled around the country on a barbecue tour (so jealous) to get their technique and style down. Their menu represents several different styles of barbecue, with Carolina-style chopped pork and St. Louis-style ribs with vinegar and a Kansas City-style sauce on the table.

On a Friday afternoon (Salvage opens at 5pm), the space was quietly humming along but with plenty of seating at communal picnic tables in the vast space. I was surprised to see so many families with children, but it's the perfect place for them.

Service is casual at Salvage - you get your own drinks from the bar, order and pay at the counter, and your food comes out via a runner who yells your name (I wonder how long this will last though, because it got really loud in there and a poor food runner was wandering around shouting, John! John! to no avail). But none of that really matters, because the food takes center stage here. Everyone in the party opted to share meat trays, various combinations of ribs, brisket, pulled pork, or sausage with two sides. Every tray is sprinkled with sweet pickles and sliced onions.

I shared a 1/2 cow + 1/2 pig tray ($15) with Dr. P. and went with mac and cheese and potato salad for our sides. The meat was nice and smoky, but I focused my main efforts on the mac and cheese. Can I say it's the best mac and cheese I've ever had and have you still take me seriously? I want to swim in it, Scrooge McDuck-style. 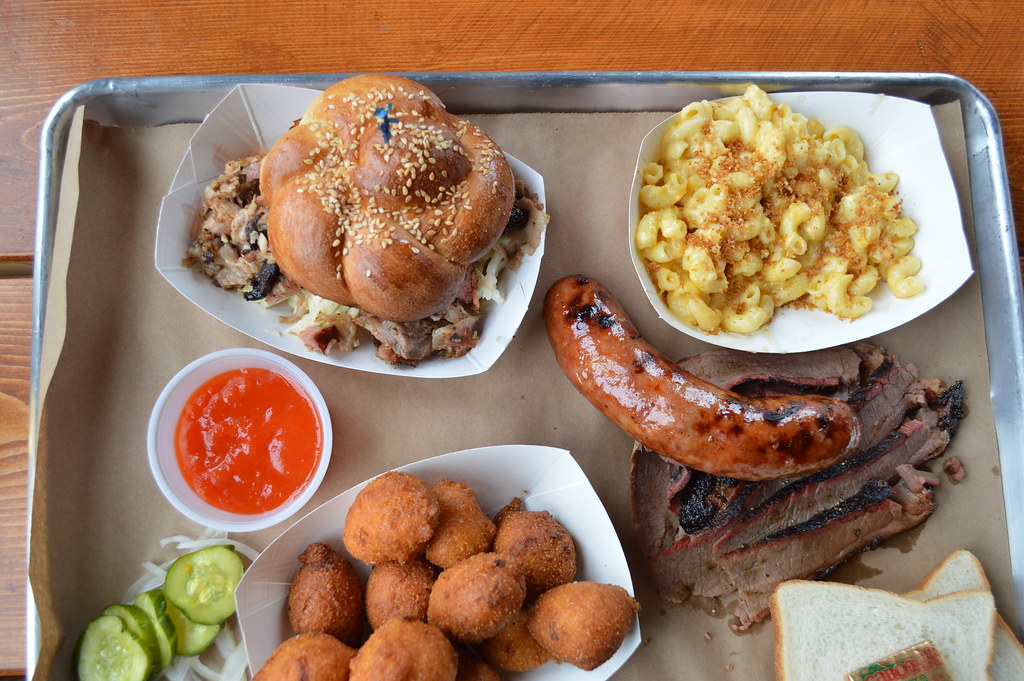 A1 & A2 shared a full rack of ribs ($23) with two sides - a large order of hushpuppies ($7) and mac and cheese ($10). Hushpuppies are those crunchy, fried cornmeal balls you see above and again, that mac and cheese! Ooh.

The ribs were everyone's favorite - nice and tender, with a spicy, smoky dry rub. I also sampled the sausage, which was very smoky, and the spicy chili which contained shredded pork, creating a great unexpected consistency.

Everyone in my party was very happy with their experience at Salvage BBQ. The prices may seem high for one, but splitting trays worked out perfectly. I spent about $25 for 2 local beers and half a tray of meat and sides with leftovers.

Salvage is perfectly positioned for a pre-Sea Dogs game meal, but don't wait until baseball returns. Head down soon to try the warming meals as the weather cools down. I'm sure Salvage will be busy all winter long with food this good.