After enviously reading S.'s Foodie Pen Pal write ups, I decided to take the plunge and sign up. Foodie Pen Pals, created and maintained by Lindsay of The Lean Green Bean, is a swap between blog writers and readers.

I sent off a package of Maine-themed goodies to Elena in Minnesota, and eagerly awaited my package from Patti in Niagara Falls. Patti lives on the Canadian side of Niagara Falls, but her New York address allows her to swap with U.S. residents.

Lucky for me, since that meant I was set to receive a box of Canadian goodies. My only worry was that I'd fall in love with a Canadian product that's hard to find in the States! 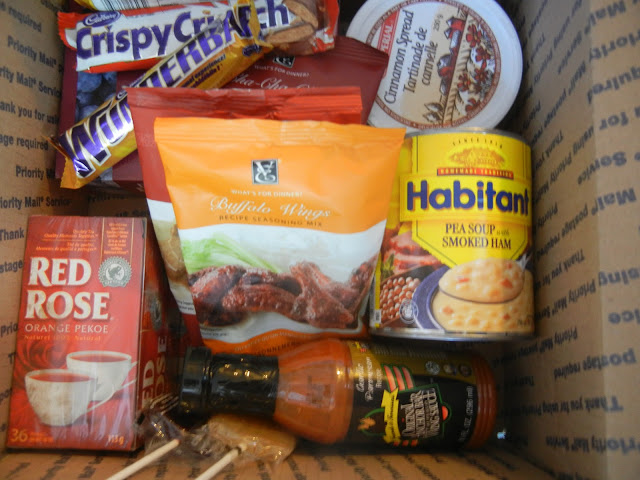 Here's my box of Canadian goodies. I first dug into the Cadbury chocolate bars; I know Cadbury makes all sorts of chocolates that aren't available in the states. I sampled a Butterfinger-like crispy bar and a peanut butter filled chocolate bar. So far, so good.

The other sweets in the box included giant cinnamon and coconut lollipops; blueberry Passion Flakes, a   fruit, and marshmallow filled puffy pastry treat; and my favorite, Imperial Cinnamon Spread. It's like a buttery, cinnamon and sugar spread, that has found it's place on my toast every morning.

But I was most excited to try the Anchor Bar Wing Sauce. Allegedly the home of the original Buffalo wing, I have always wanted to make it to Buffalo to try Anchor Bar's wings.

And with the start of football season, I have ample opportunity to make wings; it was kismet! 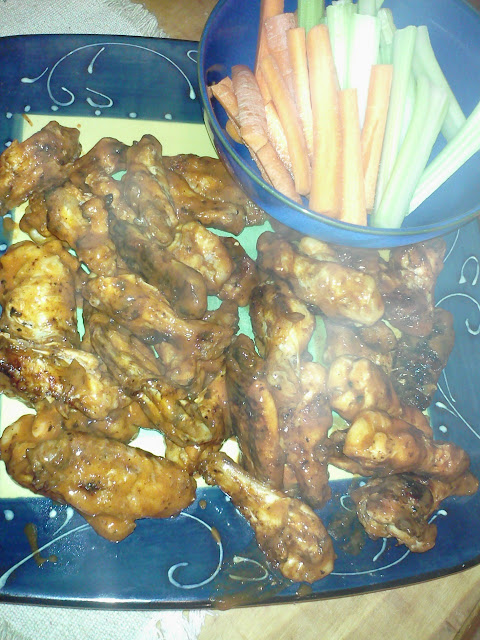 So the following Sunday, I grilled up some wings from Whole Foods - and mixed in a little Franks' Red Hot wing sauce, natch - and enjoyed delicious Anchor Bar-style chicken wings while watching my team win.

And I stil have lots of Canadian treats to look forward to! I'm saving the white bean and ham soup for a hearty lunch and the beef stew and wing sauce mixes for future football Sundays.

Thanks, Patti for the generous package, and if you're interested in becoming a Foodie Pen Pal, visit the The Lean Green Bean.