Chowder-O-Rama: Much Ado About Nothing

But no, just local bloggers singing stories of soup, chowder specifically. I chose to visit the Old Port Sea Grill, a restaurant that few under the age of 30 seem to know about. But many a summer sail have ended at the Sea Grill, and for some reason I was there during the non-hurricane of last August.

But at any rate, I associate this lovely curved, poured cement bar with cocktails, fresh oysters, and good friends. So I happily took the chowder-o-rama as an excuse to visit the Old Port Sea Grill with my new hot date. 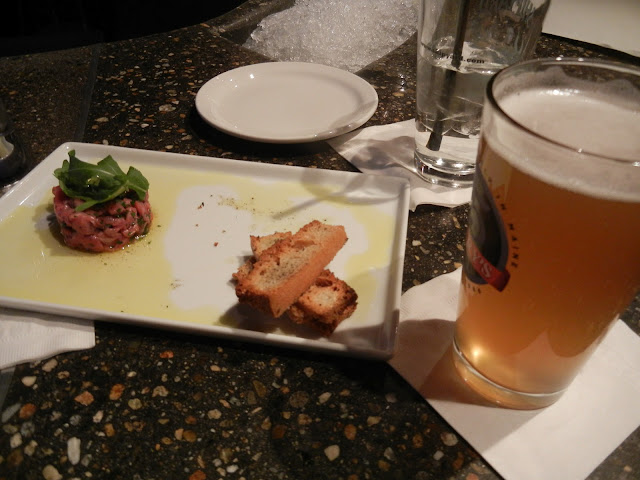 Later in the evening on a Saturday night, the bar was almost full, with several people already well into their requisite weekend consumption of loads of liquor. A. and I ordered steak tartare and a bowl of New England clam chowder to share, as well as some local beers, the Moat Mountain pilsner and the Rising Tide American pale ale. 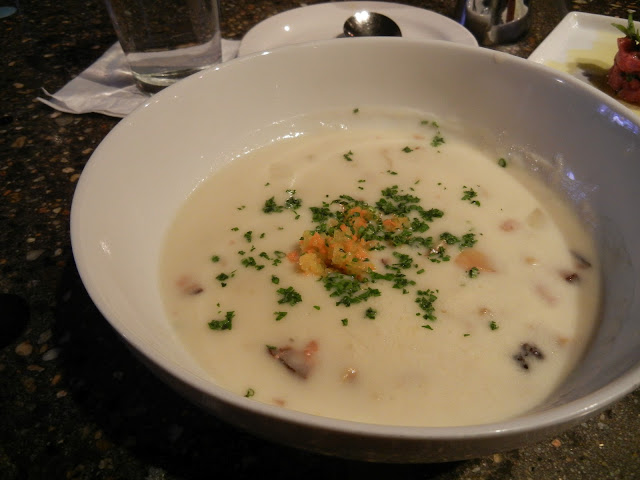 Being that A. is actually from Maine (woooo), and therefore an expert on chowders, moose, and the ocean, I grilled him on his definition of a good chowder. He said, lots of seafood, thick (like can stand a spoon up in it), and a good tasting broth. While this chowder didn't meant the density criteria, it stood up on all other accounts. The broth was nice and flavorful, it had lots of bacon and clams, cute little slices of fingerling potatoes, and a nice little mince of carrots and celery on top.

However, then the other shoe fell. I don't actually like clam chowder. I mean, I'm from Maryland, where we have lovely, luscious, sherry laced crab bisque. Clam chowder is a sad, sad substitution. I just don't get the whole clam bubble gum thing. All the other food is gone from my mouth, and I'm left chewing clams.

But I do love the Old Port Sea Grill, and they've yet to do any wrong in my eyes. So while it may not offer you the quintessential Maine experience (I bet that can be had across the street at Gilbert's or Dry Dock), the raw bar and cocktails are worth a visit.

To see how other bloggers fared in their chowder reviews, visit the round up at Portland Food Map.