This recipe has an unlikely source: GQ.  But between the tantalizing pictures of piles of corn tortillas and a mess of slow cooked pork with tomatillo salsa and loads of jalepenos, I was drawn in.  And surprisingly, the recipe was so easy to make. 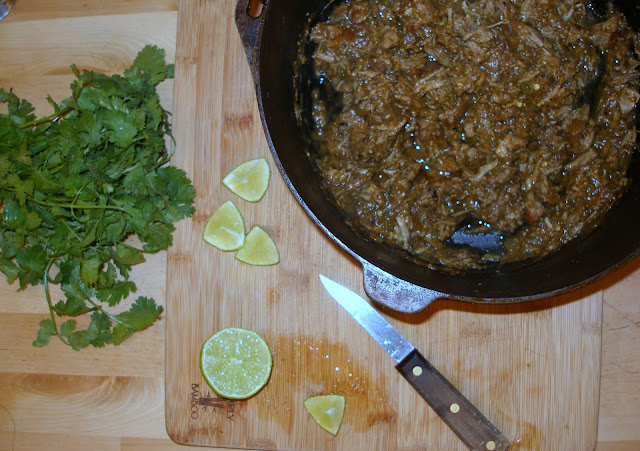 The best part about this recipe is that it's apparently impossible to screw up.  I know, I tried.

Did I mention I have a penchant for not thoroughly reading recipes?  I frequently reference a college boyfriend that made me cry after some harsh words delivered during a botched dinner prep.  What can I say?  Details like how long something takes usually escape me.

I often get all the ingredients (uh, mostly) and then stumble over some detail like, "braise for an hour or until the meat can be easily pulled apart" when I start to prep the recipe.  Minor details that then cause dinner to be served at 9pm or that recipe to be totally shelved until the weekend.  Not a good time to be 'hangry.'

And while that happened with this recipe, I felt like I could shorten some steps and still get the desired results (maybe I'm missing something out of this world by skipping the hour-long "slow fry" step, but oh well). So this recipe is adapted from a GQ recipe and meshed with one from Joy the Baker for a weeknight dinner.  Adapted because I think the original is more of a weekend project, when it can have lots of time to slow cook.  But I skipped the "slow fry" step (WTF is that anyway?) and just braised.   The meat still fell apart tender and was friggin' delicious.  And sinus-clearningly spicy.  Yahoo.

Heat a large dutch oven over medium-high heat.  Add olive oil and meat.  Brown for about 10 minutes, until you've got some nice char on the meat.

Reduce heat to medium, add more olive oil (a few turns around the pan) and then add in onion, garlic, and pepper.  Sautee for a few minutes and then dump in tomatillos.  Add 1/2 cup water.  The meat should be fully submerged; add more water if it's not.  If you have salsa verde on hand (like I did), add one pint (16 oz) of salsa.

Cover the pot and simmer stew for about an hour, maybe more.  While the meat is cooking, toss the cubed sweet potato with olive oil, cumin, salt and pepper.  Spread in a single layer on a baking sheet and roast at 400*F.  Mine took about 20 minutes; not very long, so keep an eye on them.

Test the meat after about an hour; when it pulls apart easily, it's done!  Shred with two forks until it's a nice mush of tasty, spicy, Tex Mexi goodness.  Serve in heated corn tortillas with cubed sweet potatoes, garnished with cilantro, and a squeeze of lime.