Hooray! The eighth round of the Thai-o-rama Project brings us some great Thai food: Veranda Thai. I met up with several other bloggers and food writers and enjoyed a nice night, complete with hula hooping in the parking lot afterwards (don't ask).

I was excited to try Veranda Thai for the first time, as I'd heard they made good food. But I'd never been, since living on the peninsula, I don't make it out to Washington Ave. very often (although you could even walk there from Munjoy Hill if you were determined).

There was some confusion over which Veranda Thai we were going to (turns out your iphone will direct you to the wrong spot), but I initially assumed it was because there are two locations directly across the street from each other—the original Thai restaurant that kind of looks like a trailer and the new noodle bar across the street. There were more people in the noodle bar the night we went- I'll have to make it back to try some noodles too. 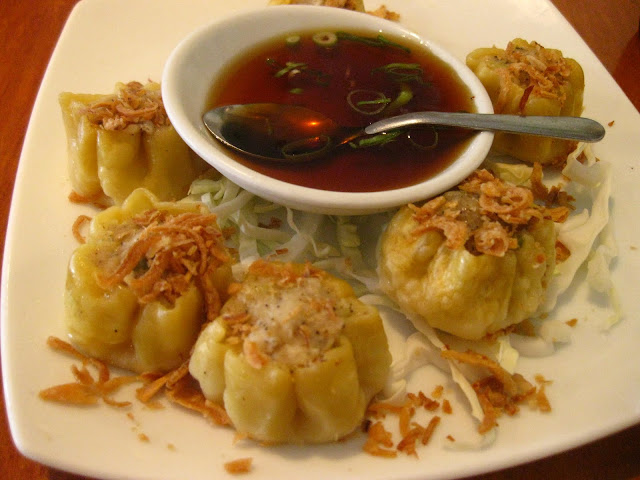 I ordered the Thai dumplings to start ($5.95), with a filling of ground pork and chicken. A. from the Portland Food Map ordered some fried dumplings, which it turns out is what I had in mind when I ordered dumplings. These dumplings were good, despite my confusion; it's kind of hard to go wrong with ground meat, a good dipping sauce and some wontons (although many have).

Because my hopes were high about the quality of the food here, I dared order Larb Gai ($10.95). 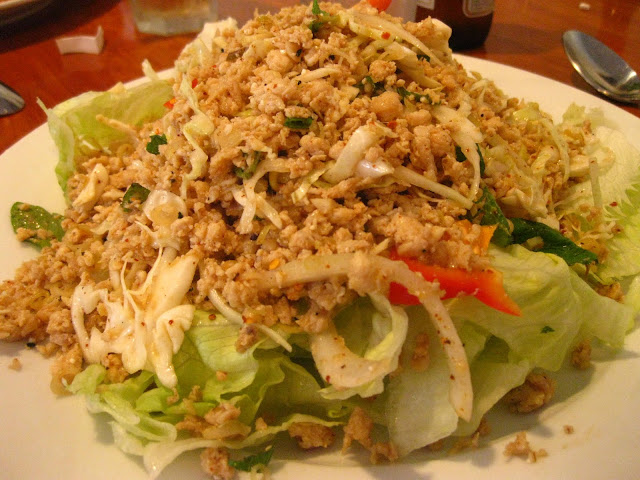 And I'm glad I did—the ground chicken was spicy (I ordered two stars), full of lemongrass, chilis, mint, and red onion. The ground toasted rice gave it a nice texture, without being overwhelmingly gritty, like I found at Viet Bangkok. Plus, I received a huge portion- certainly enough for a full lunch the next day.

My fellow diners were also happy with their dishes—the writers of Appetite Portland give me their leftover chicken pad thai to take home, and it was great as well (although, Adam had to have a little rant about how Portland Thai restaurants don't serve lime with their pad thai).

Happily, I recommend Veranda Thai for great Thai food in Portland. The decor may leave something to be desired, but who cares when the kitchen is serving such great food? If you're in the mood for some take out (or maybe try the noodle bar for better ambiance?), head over the bridge to Veranda Thai.