The other night I attended the University of Maine Cooperative Extension's workshop Recipe to Market. This is a class for people who have a food product that they are thinking seriously about manufacturing and selling. Ideas there ranged from barbecue sauce and pickles to potato donuts and seaweed dog biscuits.

I was just attending one class for some job training (I work at the Cooperative Extension), but my night happened to be the night everyone brought in a sample of the product they intend to make. And rather than serve us all chicken wings, one guy sent everyone home with some of his Buffalo wing sauce. I snagged a spicy one. Score. 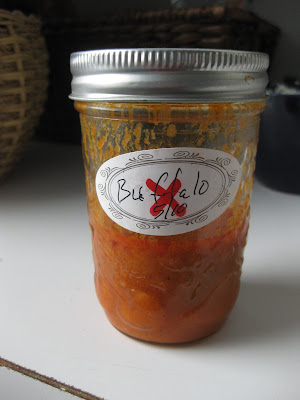 Some class participants were a little cagey about their specific recipes (especially since there are TWO barbecue sauce guys), but Wing Sauce Guy makes his with Louisiana hot sauce, tomato sauce, fake butter, and chilies. And boy is it good. 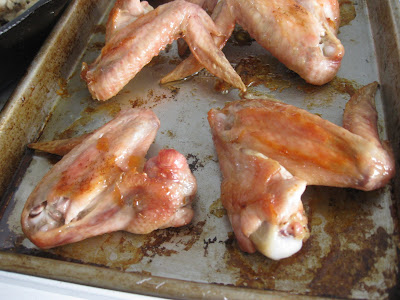 M. roasted up some chicken wings from Maine-ly Poultry, a new addition to this year's Deering Oaks Farmers' Market (for the record, he normally crocks them and then finishes them on the grill, but we are currently sans grill). 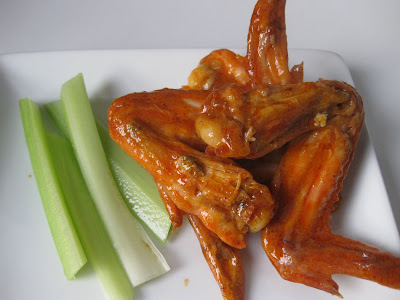 A quick toss in the wing sauce, served with celery and some homemade blue cheese sauce was all these babies needed. M. made a stellar blue cheese dressing with sour cream, mayo, Worchestershire sauce, sugar, and some crumbled Wisconsin blue cheese. We'll have a hard time going back to the bottled stuff after the homemade version.

So let's hope Wing Sauce Guy decides to go for it, since his sauce is really tasty- not too vinegary, great consistency, and super spicy. I'll probably buy the mild version though!