Inspired by this New York Times Temporary Vegetarian recipe for a variation on Eggplant Parmesan, M. and I bought some eggplant at the market. OK, I guess only I was inspired by it, because he while he was down with the non-fried variation, he didn't go for the cubing and tossing with bread crumbs, cheese, and oil bit. 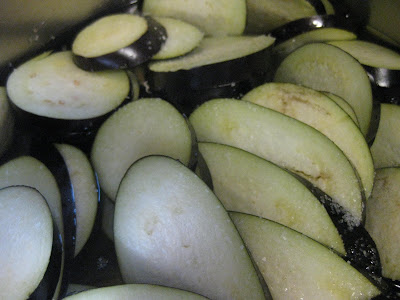 As a compromise, he suggested breading and baking the eggplant, which reminded me of my friend Darrylynn's baked eggplant pizzas. They are simply just eggplant rounds, breaded, baked, and topped with cheese (almost any kind will do). Serve topped with a sun-ripened sliced tomato, and you have the perfect patio appetizer. So I was pretty psyched to combine eggplant pizzas with eggplant Parmesan. 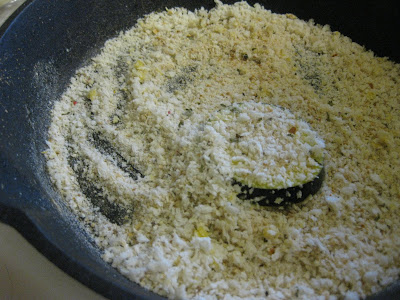 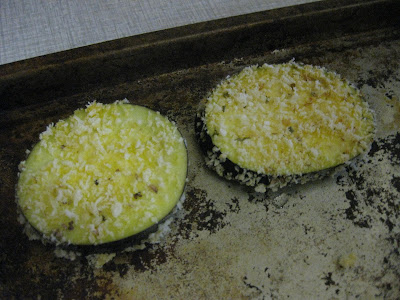 Instead of frying at this point (if you've ever fried eggplant, you know how it soaks up oil like a sponge), we just baked them in a 350 degree oven for about 10 minutes on each side. Then we topped each slice with some sliced mozzarella cheese and brought the baking sheet up under the broiler until the cheese was brown and bubbling.

Oh dear, I must have wandered off for this part, since there's no photographic evidence...

We served our toasty eggplant slices over some homemade pasta and red sauce. While this preparation lacks the mushy, eggplant/bread/cheese goo that comes from frying and then baking an Eggplant Parmesan (which I could see some people arguing is the best part), it really allows you to taste the eggplant without it being overpowered by 'fried' and cheese. Plus, I love how there is more crispiness than in a baked version. 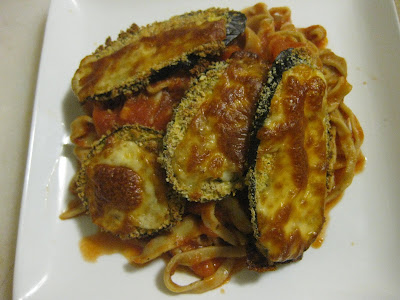 It's still just as good; try it. And if you try the NY Times Temporary Vegetarian version, let me know, since apparently, that's not allowed in my house.