Sausage with Braised Cabbage and Apples

Attempting to find a good cheap meal, I once again made braised cabbage and apples. This meal is seemingly simple, but I have yet to figure out how to make it really pack a good flavor punch. Maybe I am just spoiled after eating saurkraut, but despite adding a lot of different seasonings, this dish wasn't enough to stand up to the rich flavor of the sweet Italian sausage.

I started by sauteing a small yellow onion, thinly sliced, in two tablespoons of butter. When the onion was translucent, I added half a head of sliced green cabbage and two small peeled, cored, and sliced Macintosh apples. I sauted everything a little more, added in 1 tablespoon of fennel seeds, and then poured in a Blue Moon Pale Ale.

I let everything cook down a little bit, tasted, seasoned with salt and pepper, and then turned to the Great Internets for some flavor-additive ideas. I ended up adding thyme, 2 whole cloves, 1 whole bay leaf, and 2 tablespoons of white wine vinegar and some sugar. All that, and it still was only ho-hum! I mean, it's *edible* and all, but it's not as good as I think it should be. 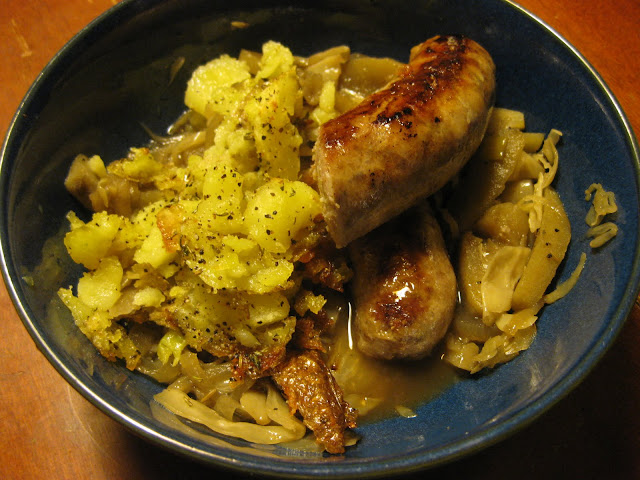 The other recipe I tried (in the same low-budget vein) was the Pioneer Woman's Crash Hot Potatoes. If you click over to her page, you'll see that hers are so pretty! And you can't beat the simple preparation that results in lots of crispy, delicious potatoey-ness. So I was psyched.

The gist of her recipe is to soften whole unpeeled potatoes by par-boiling them until they are fork tender. Then you flatten them with a potato masher, season with olive oil, S&P, and rosemary (or other herb). When you put them in an uber hot oven for 20 or so minutes, they crisp up nicely and result in the crunchy on the outside, soft on the inside texture that is so great about roasted potatoes. But in about half the time. 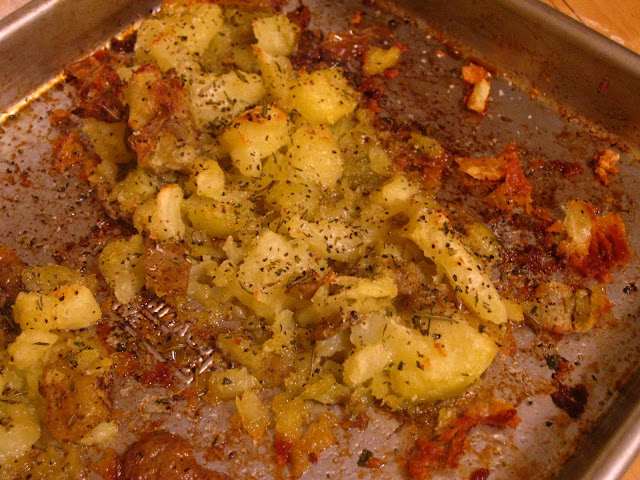 However, my potatoes completely disintegrated at the lightest touch from the potato masher. It was like, slight resistance... POW! Exploded potatoes on my baking sheet. But I continued with the preparation, and they were still delicious, just not as pretty an in one piece as Ree's. I guess that's why she's the Pioneer Woman, and I'm... not. Boo.