I've noticed that Galettes or free-form pies are very popular these days. So when I was craving some flaky, buttery, fruity, sugary goodness the other afternoon, I decided to try my hand at this rustic dessert. 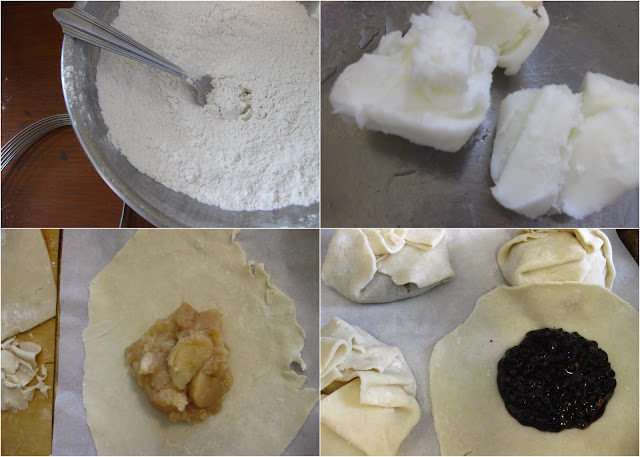 Everything started off well, with my roommate C. advising that I use lard in the pie crust. I cut 2/3 cup of lard into 2 cups of flour and 1 teaspoon of salt. I added 7 tablespoons of ice water and rolled the dough into a smooth ball. I wrapped and chilled the dough.

I decided to use some home canned apple pie filling. I made this stuff at work, to experiment with Clear Jel, a thickening product that can be used in home canning without losing its consistancy. I was a little skeptical of the pie filling at first, as the thickener turned it into a glue-like substance. But it tasted great, so I rolled out little circles of dough and plopped in about half a pint jar of filling. 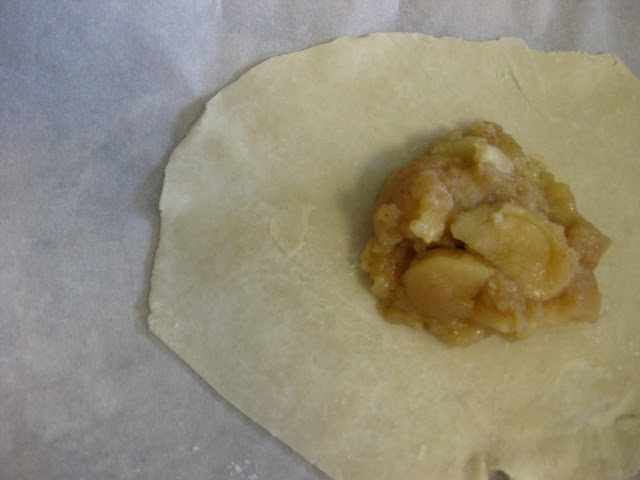 C. used her recipe for blueberry pie to transform frozen local wild blueberries into a thicker, sweeter filling for two more mini-pies. We folded the edges of the dough up, not laboring over achieving the perfect looking crust. I sang galettes' praises- oh how easy it was, how carefree the shaping of the final product. I uneasily eyed a spot in the crust where it was a little thin and the warm blueberry filling was showing through.

The four hand pies went into the 375 degree oven to crisp up. Ten or so minutes later, C. checked on the pies and said, "Uh oh, one of the pies exploded..." She removed the baking sheet, maneuvered the half-done pie off the tray into a bowl, and scooted all the other pies away from the filling now oozing over the parchment paper. We hoped it wouldn't burn too much.

Twenty more minutes later, the rest of the pies had followed suit. Filling ran together, drying out, and diminishing the crust-to-filling ratio inside the pies. We admitted defeat and pulled the tray out of the oven. While the end result was certainly still edible, it wasn't the most attractive. And galettes, while maybe not the belle of the ball, are still beautiful in a rustic kind of way. 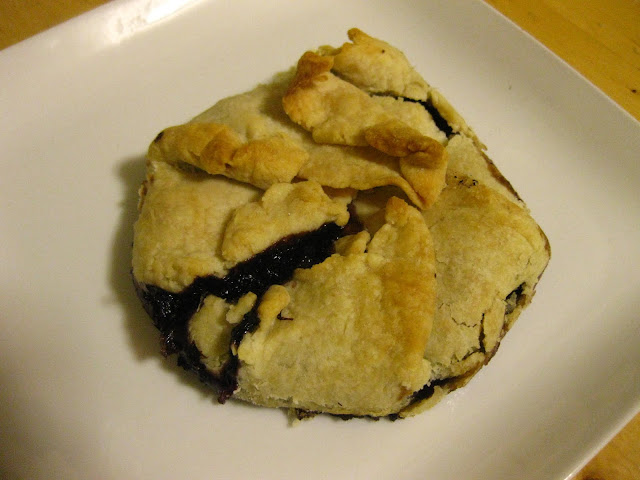 So was it the hot filling in the cool crust? Were the pies overfilled? Did I not leave enough spaces for the steam to escape? The world may never know, but I'll be sure to try again.