Recently I was fortunate enough to be invited along on my aunt, uncle, and cousin's annual holiday trip to London! We went for a whole week, spanning Christmas Day and New Year's Day.

Now I don't know about you, but one of the first things I thought about England is "bad food." So I was hoping to prove this stereotype wrong on my trip - or else I was going to be miserable for the week. And while I did have some surprises (unidentifiable fried pudding, anybody?), I found the popular opinion to be unfounded. So here is the quintessential British dish... fish and chips! 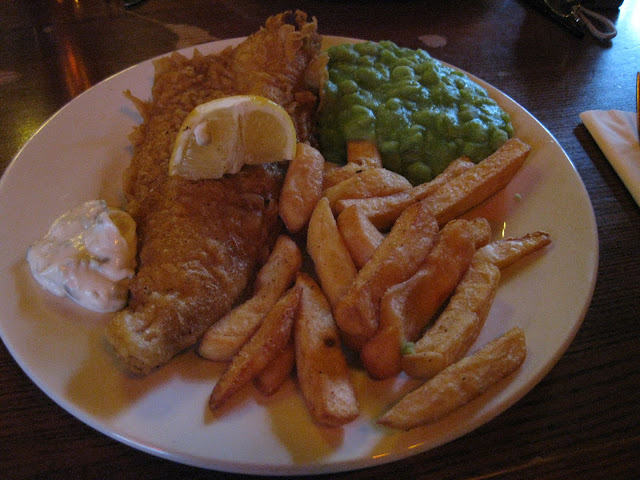 This was my New Year's Day lunch, just enough grease and 'fried' to cure my touch of a hangover (I took it easy the night before). And I enjoyed schlepping all over town with my uncle in search of the perfect chip shop. While we did find it (go us!), it was closed. New Year's Day, after all. So we settled on a nearby *open* pub, The Shakespeare Head and had this lovely dish.

While I have had better incarnations of fish and chips, this one did the trick with a nice crispy coating on the fish and yummy seasoned fries. I later found out this place is a chain (which apparently some locations try to cover up - they are going for the unique British pub look, after all), so maybe that accounts for my standard dish. Oh, and that green mush in the back? That's a side of mushy peas, a traditional English side, and it was delicious! Much better than you would imagine mashed up peas to be... it tasted more like a combination of mashed potatoes and peas.

We took a day trip out to Bath, Stonehenge, and Salisbury to see all the sights. So while on our bus tour, I learned from our oh-so-knowledgeable tour guide Phil that the West Country is known for its Cream Tea, or tea served with scones, clotted cream, and jam. Having wanted to take afternoon tea in England in general, I was excited to learn we were in the home of the best kind of afternoon tea! Phil described clotted cream as 'butter on steroids,' and after our version at the museum shop of Salisbury cathedral, I have to agree. 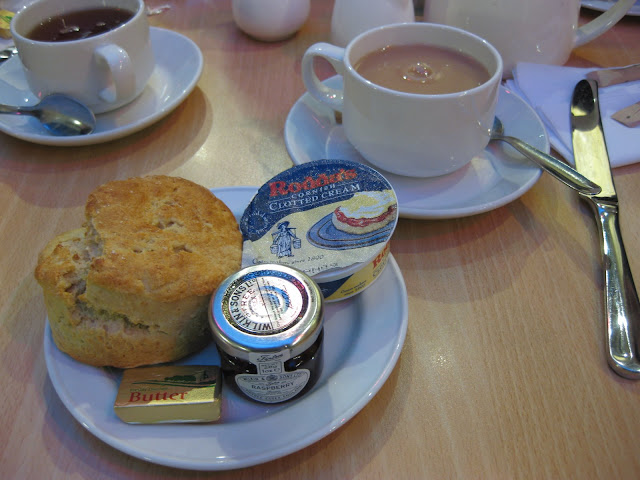 You know that if the scones and clotted cream are this good in a food hall in a museum, that they must be amazing at little shops out there in the country. So yes, I was as happy as a pig in mud and am wondering where I can find clotted cream here in the States.

So all in all, I was delighted to find that the idea of British food being terrible is largely wrong. After all, it is a major metropolitan city, so one can partake in any type of international food: French, Italian, Indian, Chinese, Thai, Korean... you get the idea. And except for the Chinese and Korean food, we hit all of those genres. So as a parting shot, here's my first foray into Confit de Canard. I was inspired to order this dish by the ravings of my fellow food blogger Liz and her amour de canard. 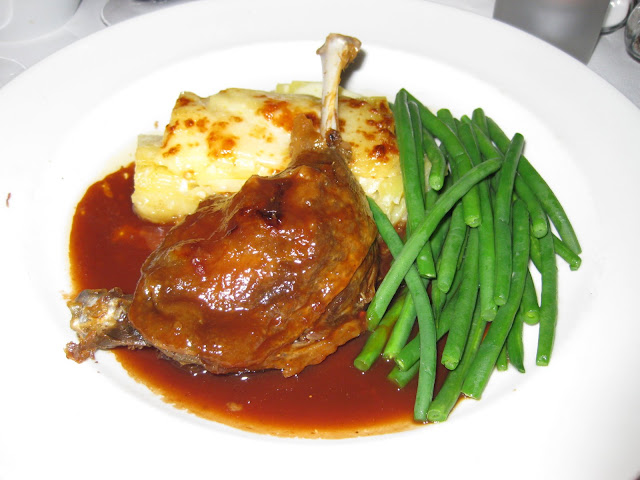 I ordered this dish at Oriel on Sloan Square (if you're ever in the neighborhood), and the confit was accompanied with Lyonnaise potatoes and haricots verts. Oh so French and fancy! Everything was delightful, and in case you're wondering, duck confit is a duck leg preserved with salt and spices and then poached in its own fat. Yum! So rich and decadent. Maybe one day I'll make my own. A girl can dream...