CN Shawarma was one of my favorite food trucks—it was always parked at my favorite breweries, the owners are so friendly, and its food was that elusive combination of meat with enough fresh vegetables to make you feel like your lunch had a semblance of health.

I loved their big, fried hunks of crispy potatoes coated with toum, a garlicky sauce that stuck with you for the rest of the afternoon. There were zippy red onions tucked into their sandwiches with chunks of shawarma meats, moist and dyed yellow from turmeric, wrapped up Iraqi flatbread that was far more interesting than a flabby tortilla.

So when the owners announced they'd sold the truck and planned to move into a restaurant space on the first floor of some new apartment buildings in East Bayside, I eagerly awaited its opening. 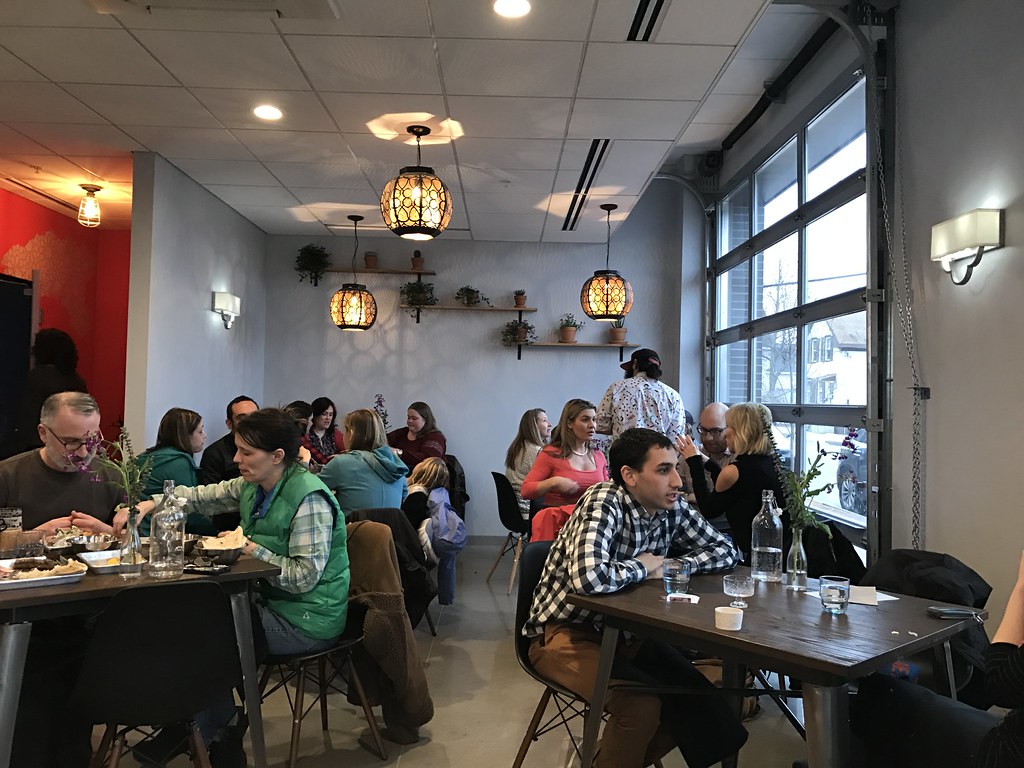 Baharat, the business' new name, opened mid-March, and like a dream come true, there were all my old favorites: falafel, shawarma, and fries, but now available with a full bar and comfy seating. As you'd expect, the new menu is larger too, with mezze like crispy fried chickpeas, za'atar deviled eggs, and baba ghanoush, and of course, that full bar.

The food truck family is tight—the bartender, Arvid, ran the popular seafood truck Fishin' Ships (which he and his partner sold last year). His speciality cocktail menu has a Middle Eastern theme, with a Charred Lemon Collins, chickpea foam on The Adventure Capitalist (rye, Cynar, spiced grenadine, citrus), and Return of the Sumac, which I ordered—a blend of sumac-infused tequila, mezcal, citrus, and a dehydrated lime rim.

There's also unusual wines from Lebanon, Patagonia, and Austria, and of course, as you'd expect from a food truck that parked outside of breweries on the reg, plenty of local beer on tap. 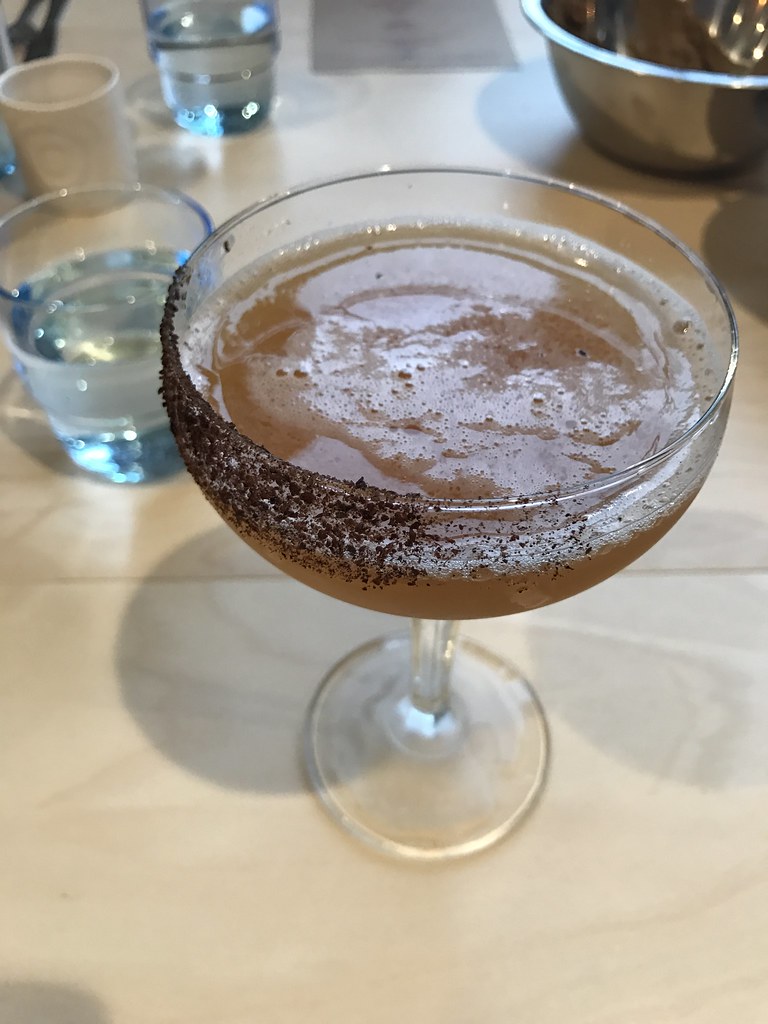 After an onslaught of dips and other mezze, the main course arrived. I ordered a plate of two kebabs, minted rice, a pile of pickles, and Iraqi flatbread. The kebab options are falafel ($12), chicken ($14), and lamb kofta ($16).

The same options are available in a wrap or as single kebabs, and The Shwarmageddon wraps up chicken, falafel, house fries, and sauce in a glorious mess. Hungry diners should go for "The All In," a large platter of kebabs, dips, pickles, and and flatbread available for 2 at $45 or 4 at $70.

The 2 kebab plate is still a lot of food—tender chicken with a nice char, a pile of crunchy pickled carrot and radish, and warm rice flecked through with mint. The thin bread is perfect for tearing off pieces and wrapping around a hunk of chicken. 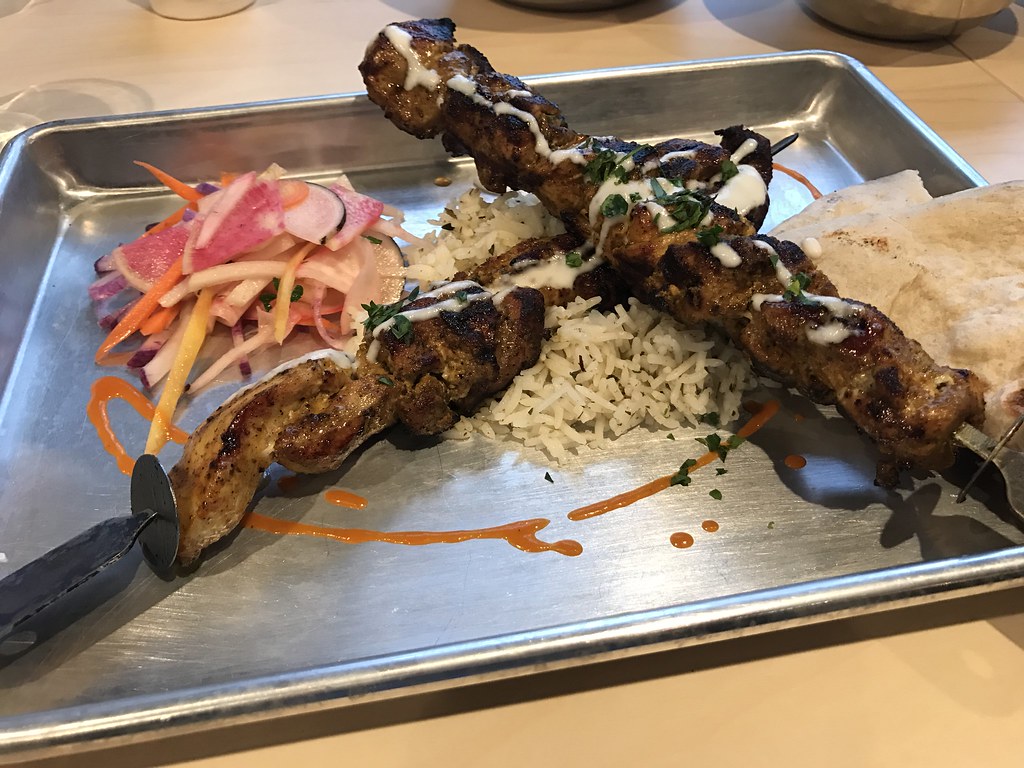 We passed on dessert, much to my regret after seeing the menu which included some sort of custardy thing (my fave). Reportedly the desserts are great, with options like baklava cheesecake and chocolate with tahini buttercream to end the night on a sweet note.

It's exciting to watch food truckers grow their business into something that's familiar and yet grows the concept of the original truck. Baharat takes the bright, unique flavors of CN Shawarma and gives them a home in East Bayside, where you too will be "all in" at first sip and bite.