At the end of this month, I will have lived in Maine for seven years now (and have written the Blueberry Files for nearly as long!). That's a long time for me to have lived in any one place - and yet there's still so much of this beautiful state to get to know. Particularly when it comes to the stretch of Route One south of Kennebunk and north of Kittery. I've explored Kennebunk and Kennebunkport, as my boyfriend A. is from there and his parents own a beach house there, and I've headed down to Kittery (several times even) with friends just because I'd heard it has a great food scene.

But my experiences south of the Kennebunks and north of Kittery are limited to the one, off-season visit I took to Wiggly Bridge Distillery in downtown York, and for whatever reason, Thanksgiving dinner shopping at the IGA in Wells, where I visited the famed Tully's Beer & Wine and had lunch at Las Olas, a great local Chipotle-style Mexican restaurant. But in the summer, it's difficult to want to a) leave Portland and b) wade through the crowds of people that flock to these southern beach towns.

All of this is to say, I'd never been to Ogunquit, which I now know to be a cute town, full of shops, restaurants, bars, and much larger than many of its coastal cousins like Kennebunkport, York, Camden, and Belfast. The high concentration of large houses with well-manicured landscaping lets you know that this isn't a rustic fishing village, but one that caters to wealthy out-of-state tourists. But the natural beauty of the area is free and accessible to everyone, and the sweet Perkins Cove area shouldn't be missed with its tiny anchorage jam packed full of lobster boats and suspension pedestrian bridge high over the river.

The occasion for my visit was dinner at The Velveteen Habit, a new restaurant in the former Arrows space, which closed in 2013 after 25 years of operation by chefs Mark Gaier and Clark Frasier (the two still own and operate a restaurant nearby in Perkins Cove, as well as a new restaurant in Boston). Owner Ben Goldman opened his restaurant last spring, after some renovation and sprucing up of the old farmhouse that is the restaurant.

Anyways, I should tell you that I was invited to be a guest for dinner (read: did not pay) by the PR company that promotes the Velveteen Habit, and so while my hard earned shekels were not on the line, I hope you know by now that I'm not in the habit of shilling things I don't actually enjoy. Because I am a cheap/broke person, however, when I return, I will be employing my "drinks and apps" strategy that allows me to experience high-end restaurants without leaving me homeless.

When A. and I arrived, we were led to our table, through the bar area, where the bar program uses house-infused spirits, syrups, bitters, shrubs, and sodas. We were seated in one of three dining rooms, one that I figured seats about 50 people, with a view into the other two, both smaller and more intimate. For our 8pm dinner reservation, the restaurant was about a quarter full, and never loud at any point - despite the dining rooms being wooden and open, the restaurant didn't feel loud or unpleasantly public. 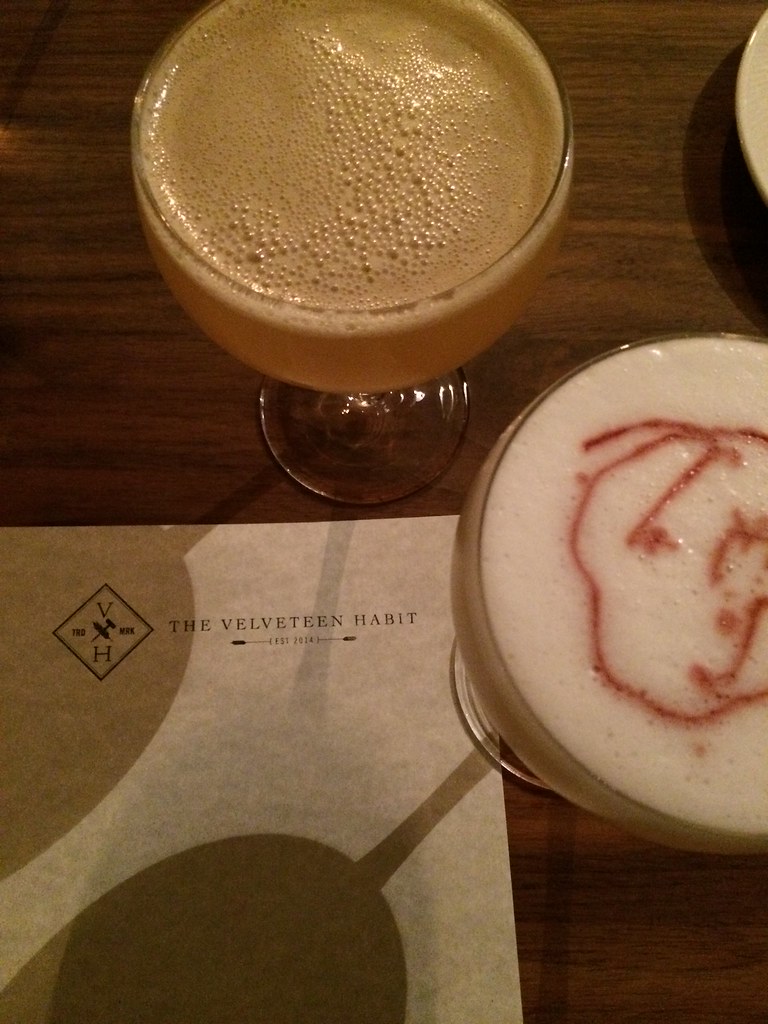 We started with cocktails, of course. A. chose the Whiskey Paramour: Laphroaig, Clement creole shrubb, rosemary honey, and lemon, and I went with the Little Pucker: Pisco, cherry brandy syrup, lemon, and egg white (all speciality cocktails are $12). A. loved his cocktail, but he loves Scotch, so he liked that it had that campfire smoke aftertaste. I'm not a smoky Scotch person, but I still enjoyed my small sip - the smokiness was only in smell and aftertaste, while the citrus and herbal middle were the main flavors. My flip was citrus tart with a cherry sweetness.

We ordered a few starters, delightfully crunchy tots with bravas sauce ($6) and beef tartare ($12), salty and mixed with chopped dilly beans. TVH has a huge garden on the restaurant grounds, and they pickle, cure, and ferment a lot of produce to use throughout the year. We started off with a cute jar of pickled peppers, cucumbers, and cauliflower ($5), and other pickled veggies appear throughout the menu. 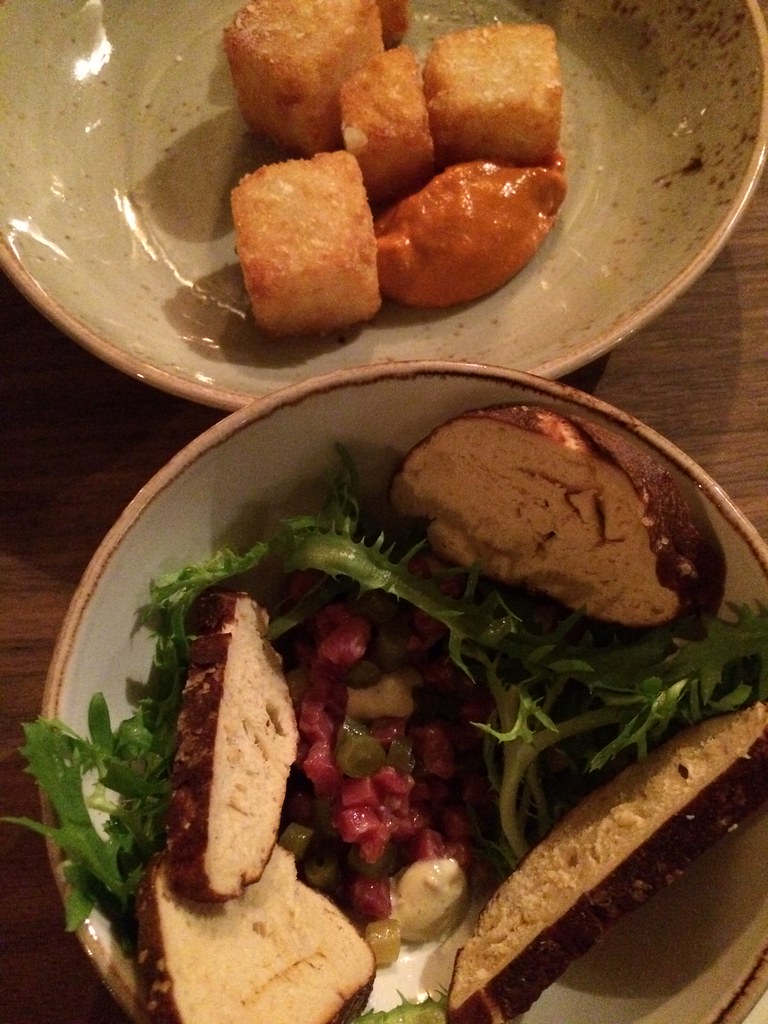 TVH also cures and prepares a lot of meats in-house, so we took owner Ben's recommendation to try the chicken liver mousse, with black currant jelly, sliced radishes, almonds and pieces of buttermilk biscuits ($9). Aside from being a beautiful dish, it was one of our favorites - rich and flavorful as good chicken liver mousse is, with a nice fruit sweetness from the spread, then a great variety of textures from the crunchy radishes and nuts. This easily makes my list of apps to return for. 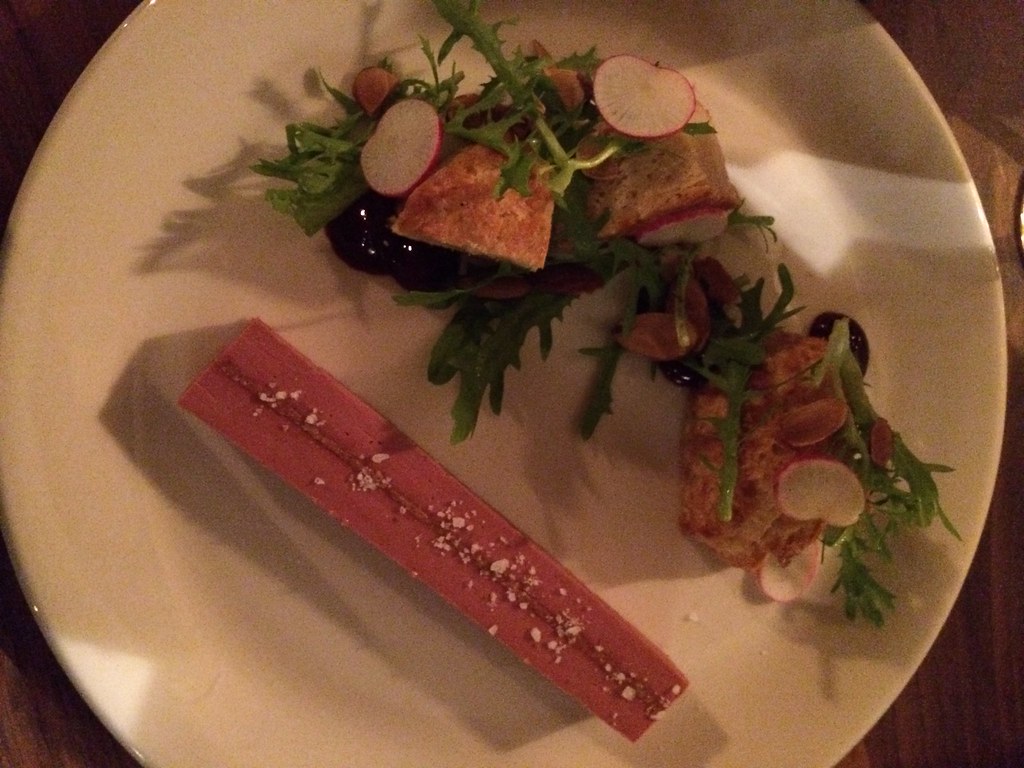 For not having eaten *all* that much, I was getting full by this point, so we opted to share an entree, the smoked beef short rib with olive oil crushed potatoes and pot roast vegetables (aka carrots and cippolini onions) topped with a gremolata ($31). It was a perfect dish for the chilly turn the weather had recently taken - comforting and filling, but yet the garlic-parsley sauce brightened up the dish, keeping it from becoming too rich. The recommended wine pairing - Nero D'Avola - was a nice touch, in that I enjoyed the wine along with the beef; my limited wine knowledge keeps me from being able to say much more than that!

Other entree choices include duck with pumpkin and Brussels sprouts, haddock with white beans and bacon, scallops with black rice and turnips, and grits, grilled mushrooms, and hot peppers. We also loved one of the two sides we tried - the roasted mushrooms ($9). They were so simple and delicious. The roasted broccoli with Caesar dressing ($6) was also nice - the dressing was particularly tangy like I like it. 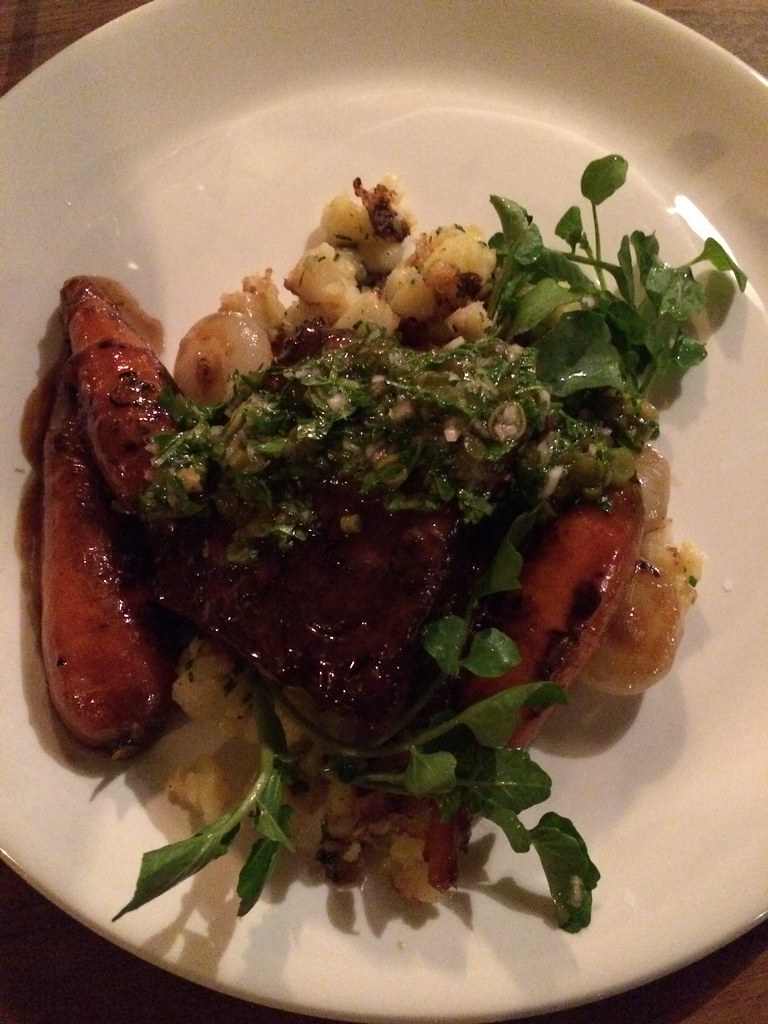 For dessert, we went with a reported diner favorite: the chocolate pots de creme or chocolate custard with graham cracker crumbs and cream cheese ice cream (hello). We also sampled a bit of the housemade Bailey's Irish Cream, which was worlds apart from the syrupy sweet, commercial stuff.

By this point in the meal, our rich menu choices were starting to add up (shouldn't have overlooked those salads apparently!), so I had a delicious spoonful and let A. finish the rest off. 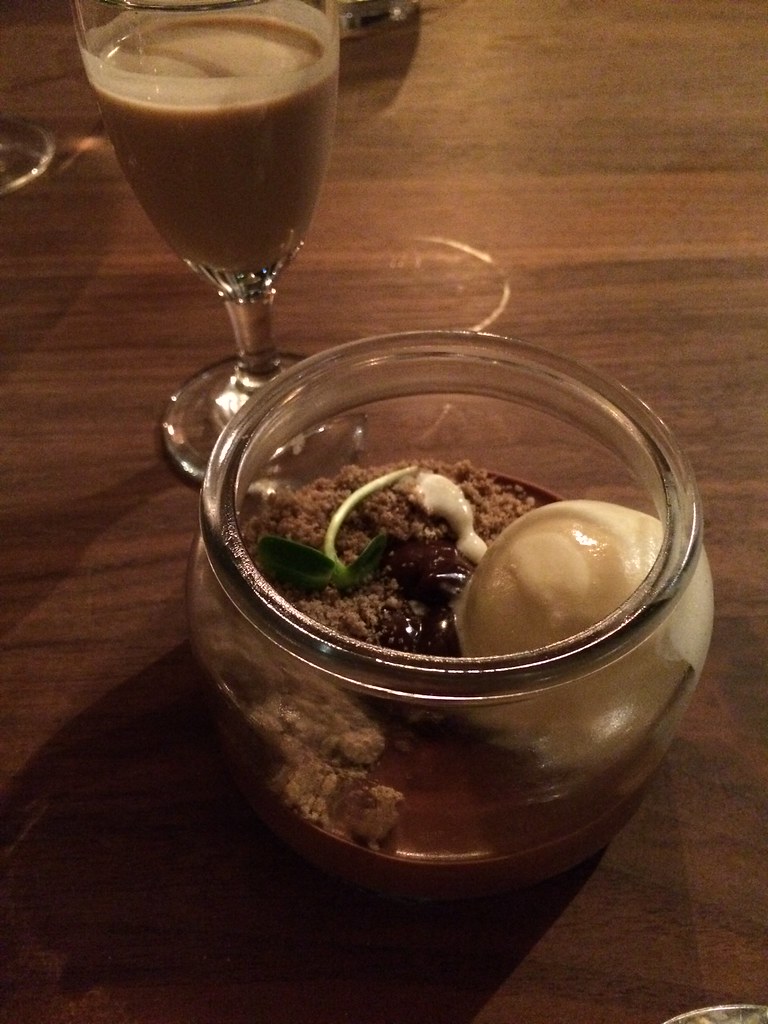 It's probably no surprise we had a great meal at the Velveteen Habit - we enjoyed our food, the drinks, and the whole vibe of the restaurant. I love that they're dedicated to sourcing local meats and produce, and preparing cured meats, preserved vegetables, and infused spirits in house. Now that I know what a beautiful town Ogunquit is, I'll be sure to continue my exploration of this part of southern Maine, with drinks and snacks at the Velveteen Habit to round out my visit.