Ed. note: East End Cupcakes is now closed.
East End Cupcakes, the hip, cupcakes-only bakery on Fore Street in Portland's Old Port, was once a competitor in the Cupcake Challenge a few bloggers and I held as an attempt to catalog the plethora of local wee cake offerings.

But both buttercream topped options participating in our tasting failed to wow me, and I was swayed by other cream cheese and ganache frosted cakes in the bunch. Unfortunately, this led me to the premature conclusion that I didn't like any of the cupcakes coming out of East End Cupcakes.

But since these cupcakes keep finding their way into my life (and no, I don't just mean that I just stop in the shop a lot!), I've had a chance to reevaluate my opinion. And I've learned that I just don't like American buttercream that much, not East End cupcakes. Instead, give me a cream cheese frosting to swoon over, please. 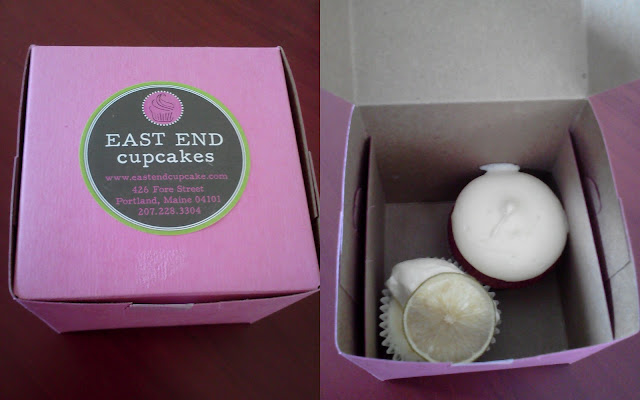 So a recent visit (when the owner lent me equipment to bake cupcakes for a friend's wedding - thanks again, Alysia!), I picked up a red velvet frosted with cream cheese frosting and a Key lime cheesecake topped with a lime chip.

And the red velvet was fantastic as usual, with a tender cake and sweet yet tangy frosting, the cheesecake won my heart. Perched on a crumbly graham cracker base, the filling was light, creamy, and far from cloyingly sweet. The dollop of whipped cream on top complimented with a sweet and fluffy kick. And the lime chip prompted me to think, and where's the tequila? A fun confection.

So I've come around and now enjoy stopping into the shop to marvel over the beautiful display of cupcakes, picking out my favorite one (most definitely the vanilla with coconut cream cheese frosting), and having a bite-sized sweet treat to satisfy my small sweet tooth.

And those cupcakes I baked for a friend's wedding? Here they are in all their glory: 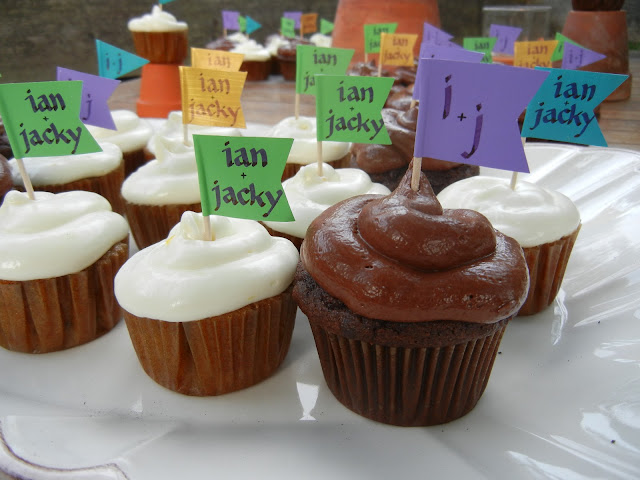 Carrot with cream cheese frosting and chocolate with chocolate buttercream. These were made on the mainland, boated out to the island, and frosted at the reception site. You might think this is the start of my career as a private event baker... but yeah, no, I'm good.

Congrats to Jacky and Ian, and mad props to my partner-in-baking, Amanda, as they turned out beautifully and were very well received and appreciated by the happy couple and guests alike.