Another report on the wings down in the Norfolk, Virginia area from my dad, the Wingman. This one from a place with "lube" in the name. Uh-huh. 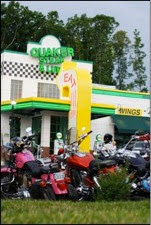 "Quaker Steak & Lube is a casual dining restaurant chain based in Sharon, Pennsylvania. The original restaurant was built in 1974 by George "Jig" Warren and Gary "Mo" Meszaros in an abandoned gas station in downtown Sharon, and decorated with license plates and old automobiles. Originally a "cook-your-own-steak" establishment, Quaker Steak's signature dish is now its chicken wings and the variety of sauces used to season them. The restaurant is known for its chicken wing hot sauce flavors, which are depicted on the Scoville scale. The hottest flavor is the "Triple Atomic Sauce", which is made from the ghost pepper. The Atomic flavor is sold individually in a dropper bottle sealed in an oversized childproof prescription container. Customers must sign a liability waiver before ordering the Triple Atomic or Atomic, freeing Quaker Steak from any liability." [Source] 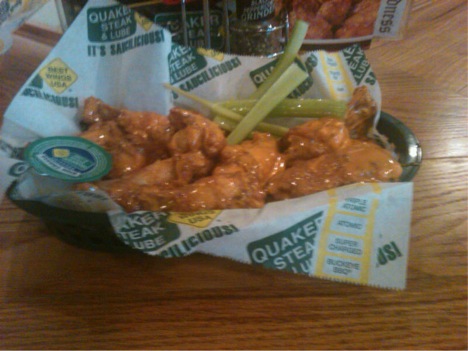 Good wings - Mild is almost like Russian dressing – Atomic wings are supposed to be off the chart, but I’ll never know. Portions are ok, some pigeon wings mixed in.  Beers are outta sight, $4.00 Bud Lite drafts – how’s that work, $1.50 at the Thirsty Camel, $4.00 in Newport News? – must be the atmosphere.