Ed. Note: El Rayo Cantina has closed.
Tuesday saw the brief return of original Roomie A. - my long lost girlfriend Amy who moved to the Big Apple last year. I understand that some people need to go away before they can come back; I am one of those people. But that doesn't mean I have to like it on others.

The only perk of her exodus are culinary - eating through New York in a weekend or eating out in Portland when she comes to visit. So Tuesday night, we were excited to try the new expansion of El Rayo Taqueria, the Cantina. 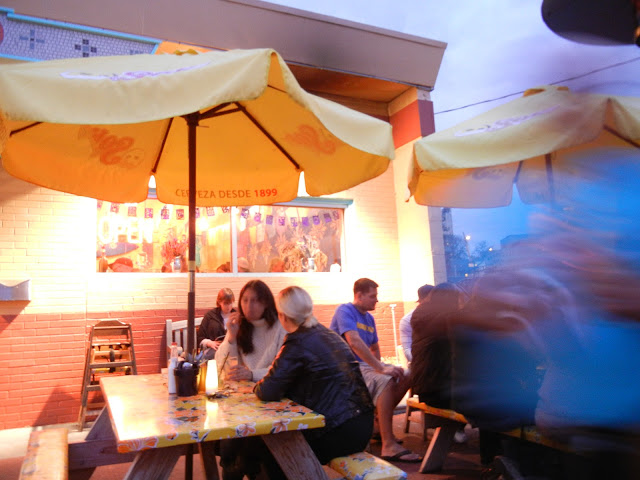 I've enjoyed El Rayo for $1 Oyster Mondays and beers on the patio, but have never really found my groove with the food inside. For tacos, I gravitate towards Taco Escobarr and Taco Trio (love El Rayo's Mexican corn though).

However, the buzz I've heard about a few things at the Cantina, especially the Slow Burn cocktail and the Jalapeno Cheese Puffs (!!!) bumped the new restaurant up to the top of my list of places to try. 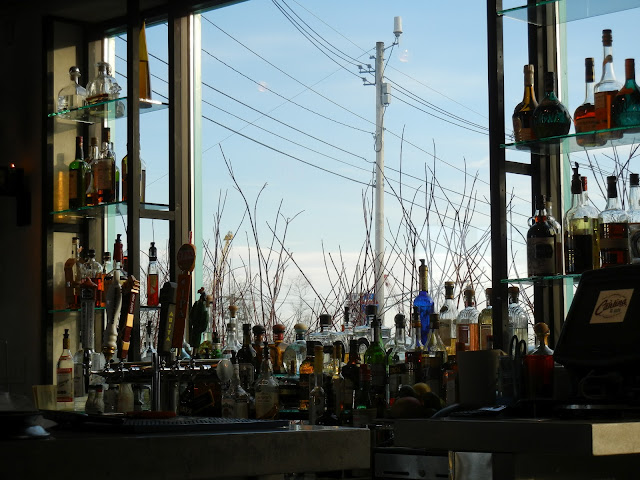 The new space is located on the far side of El Rayo's parking lot. When we walked in, the lengthening spring days gave us a nice sunlit view of the bar. Even though we sat in a booth I was visually drawn towards the bar area.

And the bar would be a great place to spend your time, between the 30 tequilas to choose from, the cocktail list, and a late night bar menu (note: food after 9pm in Portland!). 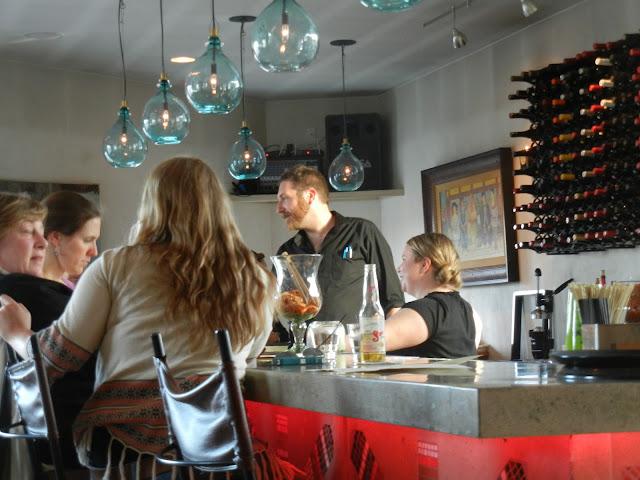 In addition to that Slow Burn (pepper-infused tequila, lime juice, vermouth, olive brine, and triple sec, served up and rimmed with spicy "mystery powder") I mentioned, we tried the El Cuidad - tequila, St. Germaine, agave nectar, and lemon juice, served up with a twist.

I love a tart cocktail, and this one did not disappoint, with the tequila shining through too. The Slow Burn was good but primarily tasted spicy to me. Good for sharing and/or sipping slowly. 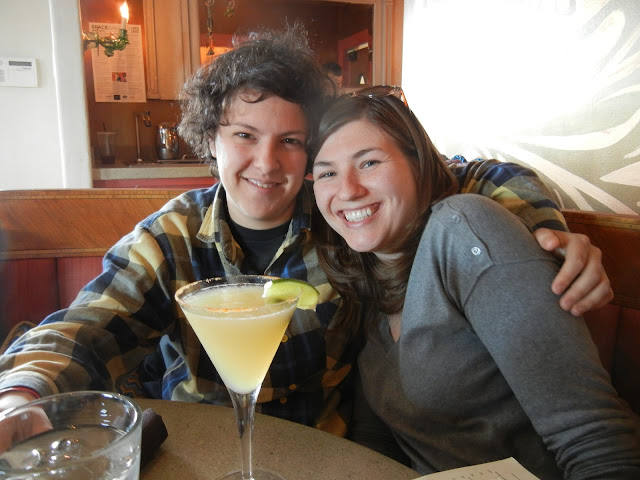 We sat in this corner booth right by the entrance, between the kitchen and the rest of the restaurant. Our service was friendly and prompt - we were, after all, right by the wait station - and we opted to share a lot of the small plates from the menu. 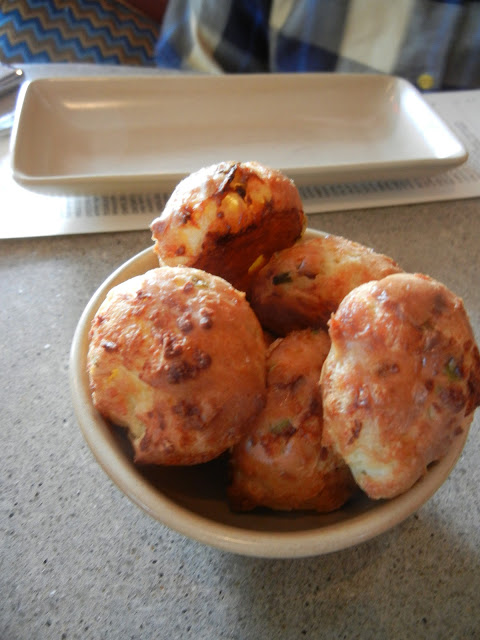 So, obviously cheese puffs. Not too spicy, despite containing flecks of jalapeno (which is good, since Amy was starting to sweat from the Slow Burn). 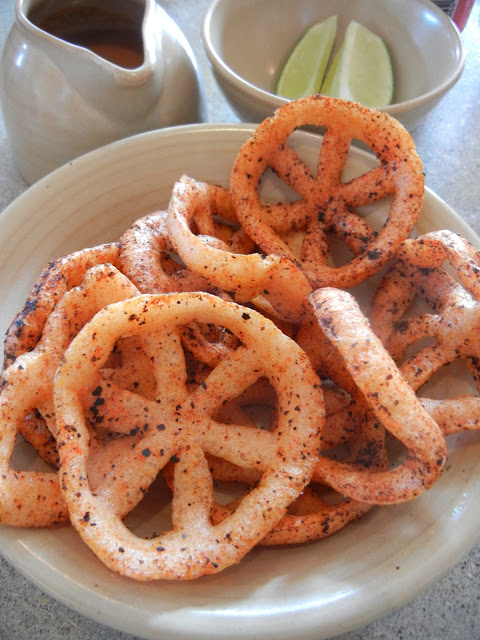 And chicharrones, which are not pork rinds (which I asked in horror as I watched one go towards my Jewish friend's mouth), but rather like a spicy, molded corn puff. I had a few, but then decided they were taking up room in my stomach that I'd rather go to a cheese puff. 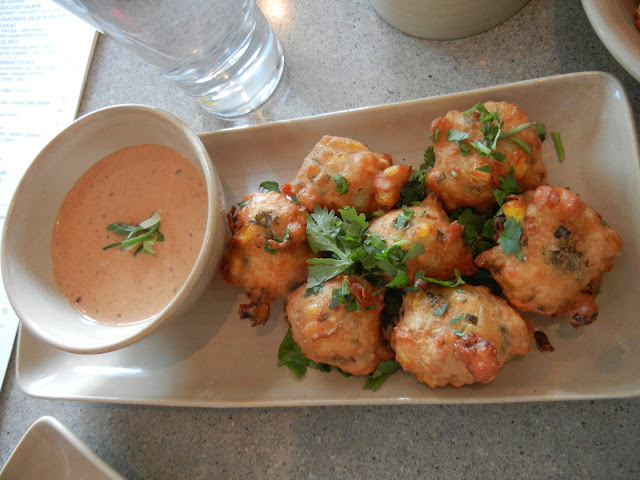 Our server suggested we order the corn and jalapeno fritters as they "go well" with the cheese puffs (yes, we were upsold, but c'mon people, fritters). And they tasted a lot like the cheese puffs, but instead of being hollow in the middle, were full of corn and soft batter dough. Delicious. 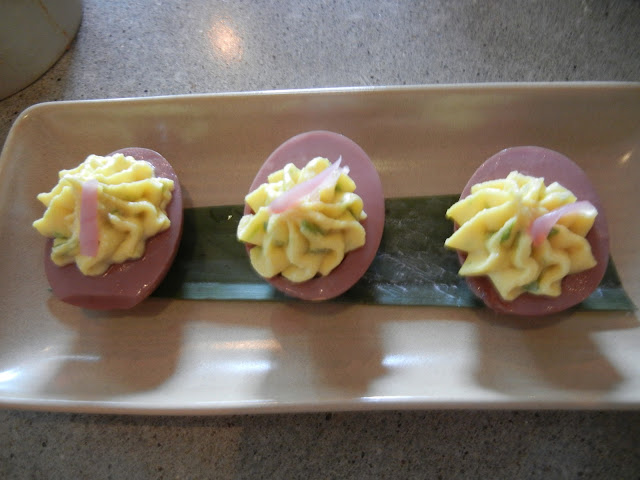 The hibiscus pickled deviled eggs disappeared equally as fast, but the texture of a pickled egg white might be off putting to those expecting something softer. The eggs were tart, which cut the creaminess of the yolk filling. 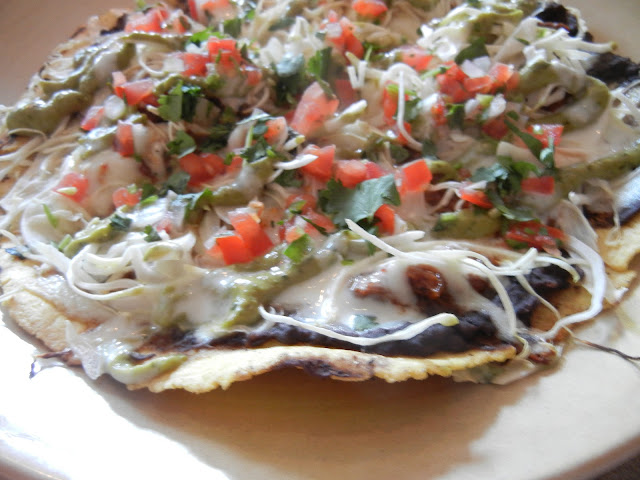 Home stretch here - we shared the beef tlayuda, a grande tostada or a tortilla shell with black beans, cheese, shredded cabbage, salsa, crema, and cilantro. And while the shell was a little floppy (but thereby indicating that it was homemade), the cheese and crema helped our burning tongues from all the spicy appetizers, while the rich meat and beans filled us up. 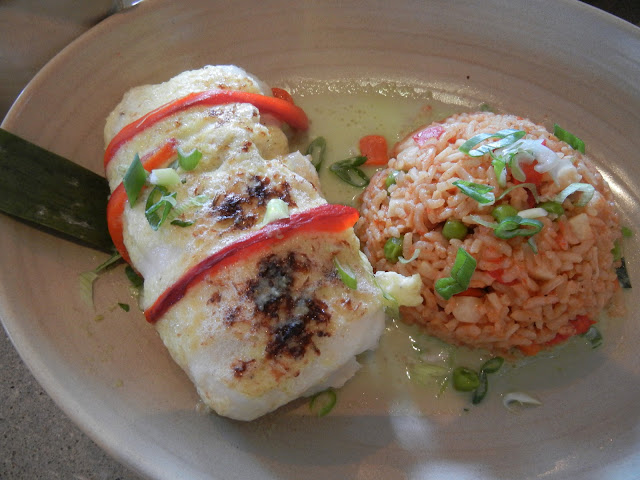 Seafood relleno was a surprise to us; we were expecting a seafood stuffed chili. But once we thought about it (ohhh, relleno means stuffed!), the hake wrapped around crab and shrimp filling made more sense.

And while I'm always wary of hot, creamy seafood, this entree was great. The fish was cooked just right, the filling was creamy and slightly spicy, while the cool lime and garlic sauces added some tang. The Spanish rice, usually an afterthought, was just as good, and was filled with vegetables that added a nice textural contrast. 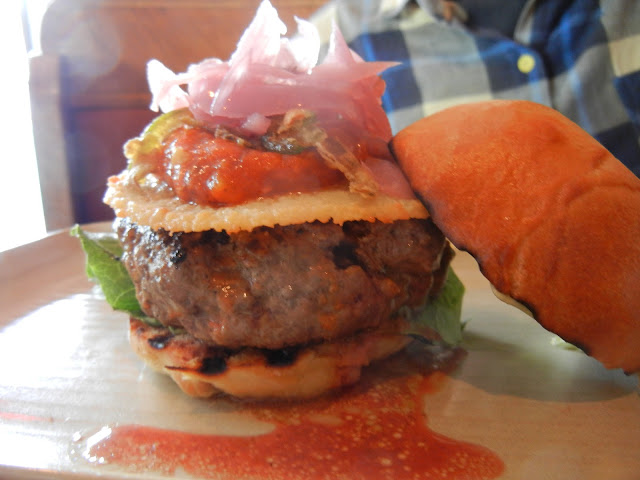 And while no one was allowed to share this burger with A2, she was happy that it came as rare as can be ordered. I actually didn't get any feedback from her on anything other than the chips, but I can tell from looking at this burger with tomato jam and cotija crisp that it's amazing. It was gone in an instant. 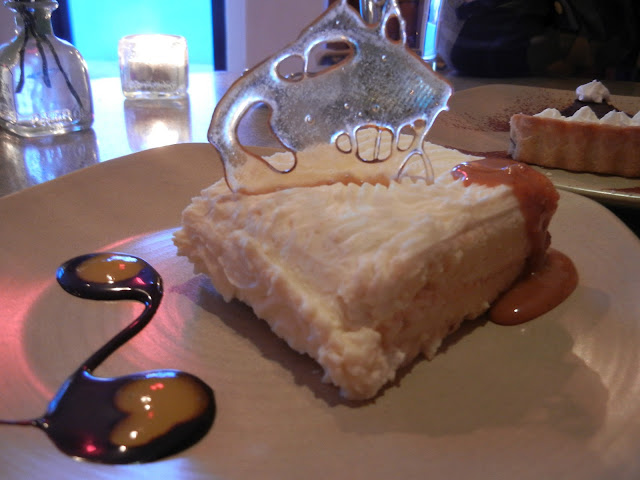 I was really looking forward to dessert, having foregone the leftover Easter coconut cake that afternoon in anticipation of some great restaurant desserts. But between the tres leches, the churros, and the Oaxacan chocolate torte, nothing really filled my craving.

The tres leches cake was too dense and sweet; the cake and the frosting were both dry. The chocolate torte had an unexciting crust and a chocolate filling that barely glimmered of any special spicy chocolate, while the churros weren't rather flaccid. Boo! Too bad, I was really looking forward to some good Mexican desserts. We were, however, delighted by the melted sugar on top of the cake that looks like a monster (rar!).

In writing this review, I want to go get one of those Cantina burgers all to myself. I'll definitely be back for tequila and cheese puffs at the bar, maybe after a round of cornhole and $1 oysters on El Rayo's deck. I hope you stop in and try the Cantina - good late-night dining options in Portland need to be supported.