I feel bad. I should have seen it coming. It could have been an "it's not you it's me" moment. But I had a disappointing lunch at District last weekend, and I think that's the nail in the coffin for me.

When District first opened, I raved over the chicken and waffles and other brunch items. I had a crazy salty burger that nonetheless had a lot of potential. I shared a round of appetizers with friends and enjoyed a peanut cole slaw, cornmeal crusted calamari, and short ribs. I had a disappointing meal of mustard glazed wings and brussels sprouts.

But that first experience with chicken and waffles stuck in my mind; maybe that's what drew me towards District again. Here's what I had April of last year: 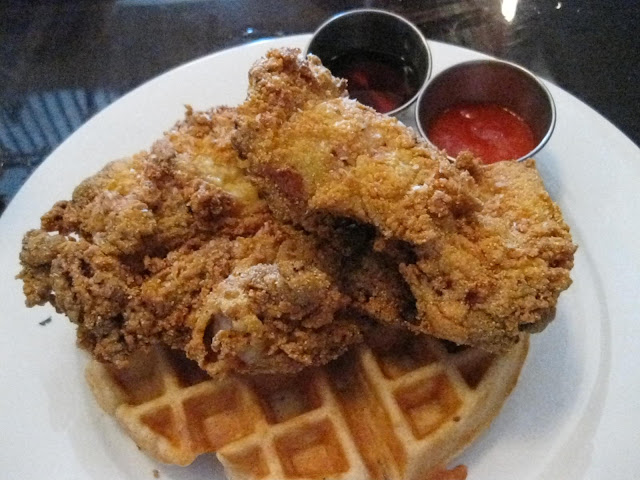 District's all-you-can-eat Chicken and Waffles for $12, served with housemade Srirach sauce and real maple syrup. It was delicious and gut busting.

And here's what I had last Sunday: 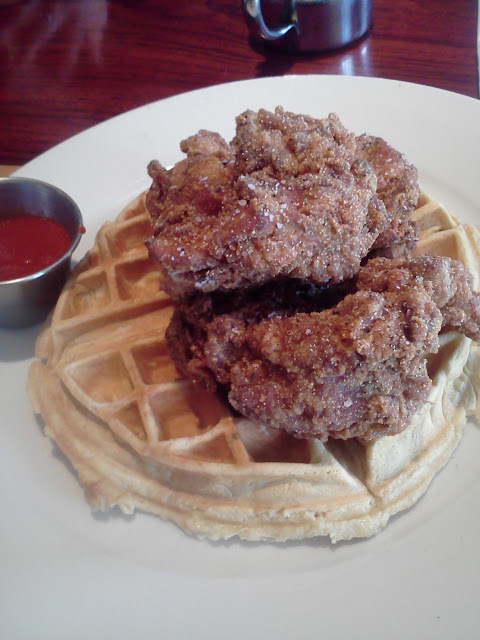 I sat at the bar and had terrible service (it wasn't that busy), but finally got my food and drink. My dining companion was disappointed that his breakfast sandwich didn't come as described on the menu (a Hannaford-esque bulky roll stood in for the housemade baguette).

And my sad waffle was topped with a smaller portion of chicken and this time around came with Aunt Jemima style syrup. Yes, I could have all-I-can-eaten more, but between the terrible service and the terrible waffle, I was disappointed in my experience.

So I've given up. In retrospect, I should have seen the steady decline and steered my Sunday lunch to another spot, but I was drawn in by that memory of delicious chicken and waffles.

There seem to be some changes afoot in the restaurant, but until I hear otherwise, I think I'll avoid the place and save my money for more reliable dining experiences.