While perusing menus of restaurants participating in Maine Restaurant Week (which continues through this Saturday), there was a lot of 'meh'ing in my head. Nothing against any of the Portland restaurants, I just felt the need to shake my late-winter dining blues by thinking 'outside the penninsula.'

When I hit upon Fuel in Lewiston's menu, I immediately emailed Dawn of Appetite Portland. It sounded like a menu worth driving 45 minutes for, and it would satisfy my culinary wanderlust. Sold. 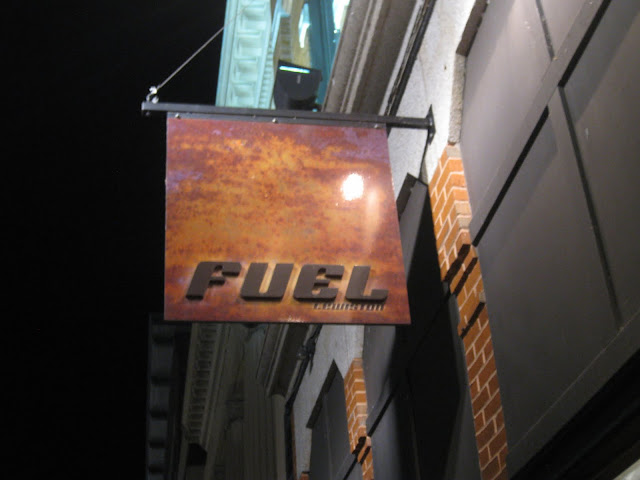 But when I told people my plan, I was met with a lot of wrinkled noses and some "Why?"s. For those of you from away, the Lewiston-Auburn area (or L/A) gets pretty thoroughly trashed down here in Portland. The stereotype is that there's not much going on- some people make it sound like it's a Superfund site or something. Not being a Mainer, I hold fewer regional biases; although I have been pretty thoroughly traumatized by driving down L/A's plentiful thoroughfares filled with strip malls and fast food restaurants.

But once you wade through all of that, Lewiston has a cute, burgeoning downtown area. The two cities have followed a typical pattern of industrial decline followed by urban renewal. And it must be noted, that Lewiston is home to Bates College, one of Maine's big 3 private colleges. And where there's college students and professors, there tends to be cultural and culinary spots of interest.

And I found Fuel to be a cross-section of the white, middle-class population in the area, a mix of old and young, with middle-aged ladies sipping lemon drop martinis and dudes in Bruins jerseys watching the game at the bar. 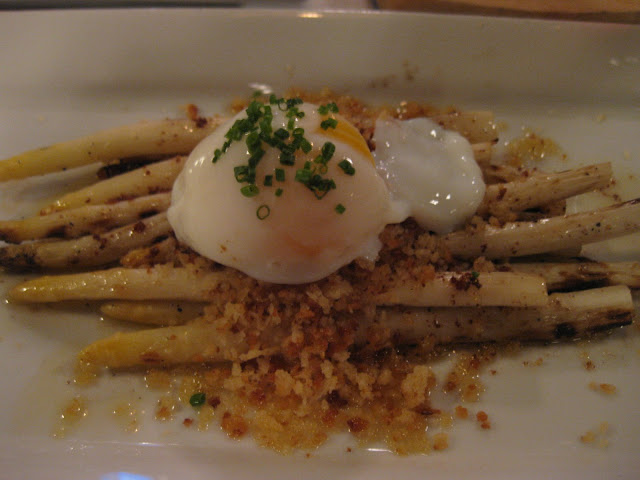 But really we're here to talk about the food. I went with Choice #3 from the Restaurant Week menu, which began with white asparagus cooked sous vide, then grilled. It was served with a sous vide egg and brown butter bread crumbs.

We also added a charcuterie plate, which was unremarkable, and duck rilettes, which were pretty great. The asparagus was all things good- runny egg, crispy bread crumbs, and some asparagus to emulate health. However, it was very rich and tended towards the greasy side as I got near the end. 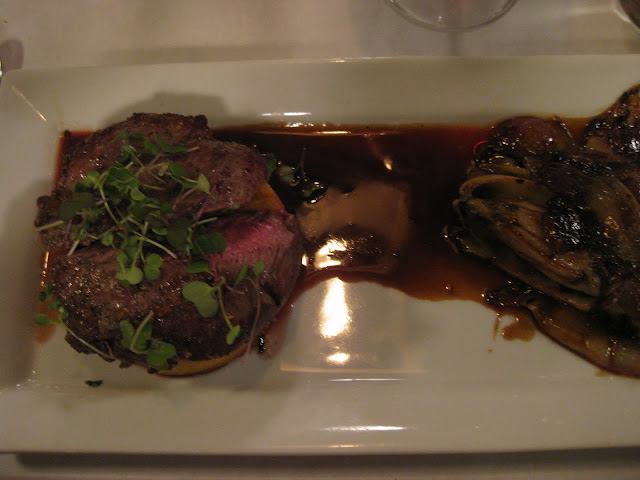 My entree was a lamb sirloin, roasted and served with grilled red grapes, radicchio, and endive, served in a red wine sauce. There was a cheddar polenta cake hiding under the big, beautiful piece of meat.

For me, the meat took center stage. The accompanying ingredients had too many faults to create a cohesive meal (overwhelmingly bitter greens, boring polenta, salty wine sauce), but the lamb sirloin alone was excellent. The meat was prepared very simply, but with enough salty, crunchy bites to let the inherent flavor of the cut shine. 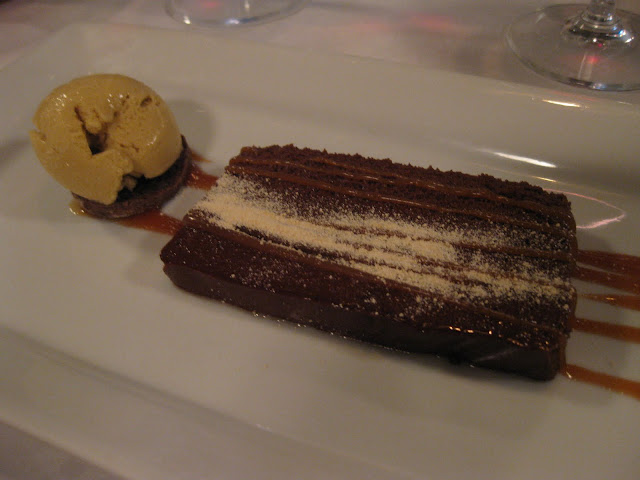 It was the dessert, however, that made me feel like all the bickering over directions en route to Lewiston was worth it. Chocolate torte with Maine sea salted caramel, malt powder and Guiness ice cream. The torte was fluffy and mousse-like, with rich chocolate, crunchy malt, and a salty caramel sauce. The combination of varied texture and great flavors came together to elevate this dessert to more than the sum of its parts.

The first two of my courses are offered on the regular menu, so while you may not make it up there for Restaurant Week (although you should- at $30pp this menu is a bargain), you can still try the great lamb sirloin. My delicious dessert is not featured on the regular menu, but I trust that their pastry chef knows her stuff, and that you will be happy with her dessert du jour or her other preparation of the chocolate torte.

So if you ever find yourself suffering from post-traumatic strip-mall syndrome in downtown Lewiston, I recommend you check out Fuel for a modern twist on some French classics.