At first, I was going to give Figa some breathing room on their opening night. I went down to Havana South instead, a place we've really enjoyed drinking in two or three times before. This time, we decided to push our luck and order some bar bites. I'll elaborate later in the week, but suffices to say I wasn't impressed with my two dishes and decided to go check out Figa after all. 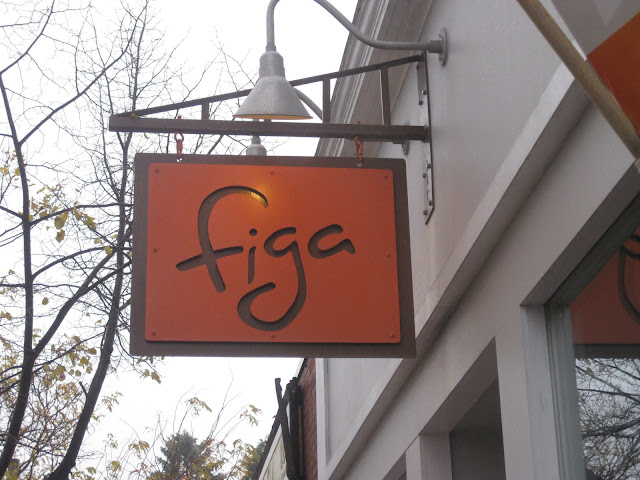 I arrived kind of late for Figa (8:30 or so), since they stop serving food at 9pm. But after I chatted up some friends and got the skinny on what was good, I sat at the bar with East End Bartender Bob, who has relocated from the Front Room to Figa. I ordered a glass of Montepulciano and M. a Peaks Organic Nut Brown Ale (on draught).

From smushing my face up against the glass for months (a year?), I knew the place was beautiful inside, plus the construction was done by my good friend Ryan! It is so cozy and cute - bright but warm, with lots of personal touches. It looks like a restaurant that's been open for a lot longer than it has.

My date and I quickly ordered the Wild Boar Rendang and Bharta from the "Spoons" section of the menu (the smallest portions). While we waited for our food and enjoyed our drinks, the restaurant was winding down. Chef Lee Farrington was in the kitchen (visible over a half wall), and she looked happy to be in her element. The wait staff buzzed around me, since I was sitting at the end by the service bar, asking each other questions ('how many scoops go in the single French press?'), and then later on, showing their excitement over our food ('isn't the Bharta so good??').

I was excited about the food too- hearty, slow-cooked, shredded boar in a spicy, tomato-esque sauce; the Bharta, curried stewed vegetables (zucchini, eggplant, onion), sweet but spicy. I asked for something starchy to go with it and was rewarded with slices of two quick breads, blue cheese walnut and an orange herbed one. And of course a ramekin of butter.

While we savored our appetizers, the kitchen closed, leaving us wanting more, but happy with the small selection we had. I'll certainly be back for a full dinner, as I'm looking forward to see what else Chef Lee and her staff are cooking up in the back of this charming, much anticipated restaurant.