Chiang Mai Two has moved to a new location on Washington Avenue. I'd never been to the old Chiang Mai (One?), so I didn't have any expectations going into Round 11 of Thai-o-rama. (For those of you moved to lie in the fetal position and whimper, "No more Thai reviews," first, think of how I feel, and second, there are only two more, so husshup.)

The decor in the new Chiang Mai is typical Thai restaurant, but with a lot more flash. Everything's so... shiny. They do not yet have a liquor license, so we're told we can bring in our own beer. M quickly runs across the street to the 7-11 for a 6-pack of Geary's. We (M and I and the Appetite Portland couple) begin by ordering a crapton of food: pork/shrimp dumplings, fresh veggie spring rolls, Thom Kha Gai soup, and beef salad. 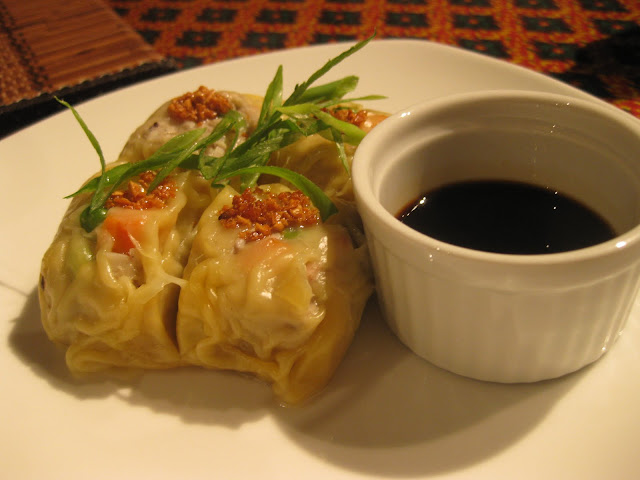 The dumplings are pretty mundane, but disappear quickly. They have what seems to be pot pie vegetables inside of them (a cubed carrot and one pea). Odd. 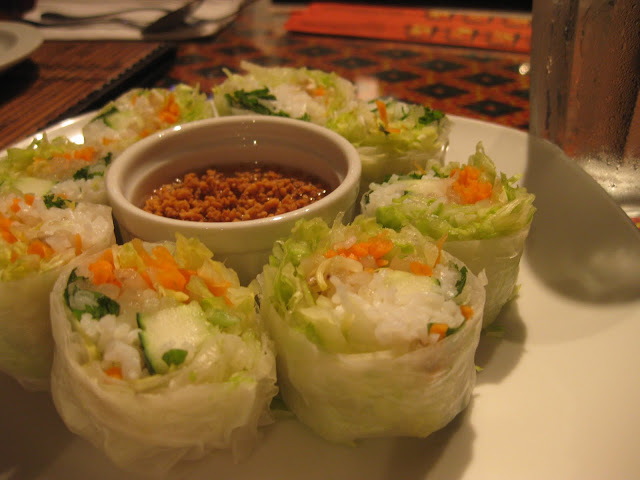 I like the spring rolls, fresh with a syrupy sweet dipping sauce topped with crushed peanuts. I'm into sweet Thai food, but I can see where the sauce might be too much for some.

The soup is very good. It's not too thin, full of flavor, but has the requisite dry, overcooked chicken in it. Why is this something I just have to accept when it comes to Thai food?

The best appetizer, was the beef salad. Our waitress recommended it as her favorite salad, and it quickly became mine too. 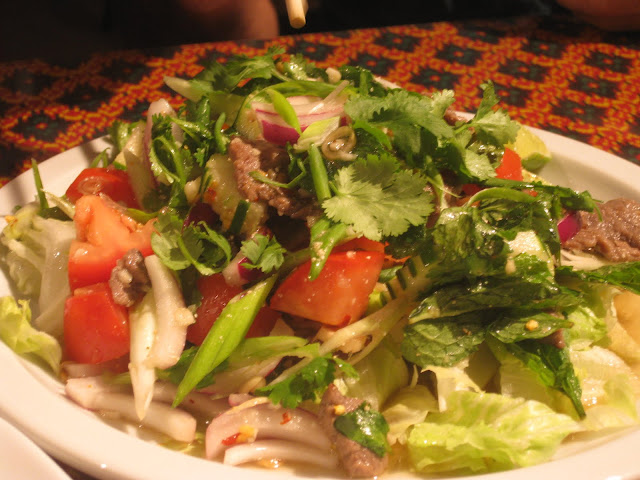 There's lots of fresh mint and cilantro leaves, plenty of spice (2 stars is pretty hot at this place!), juicy dressing, and non-dry beef. I would return to have this salad for lunch.

I ordered pork Panang curry (2 stars) for my entree. As I was perusing the curry section of the menu, I was intrigued by the curry that has baby marrow as an ingredient. Is that legal?? I'm sure it's delicious, nonetheless. 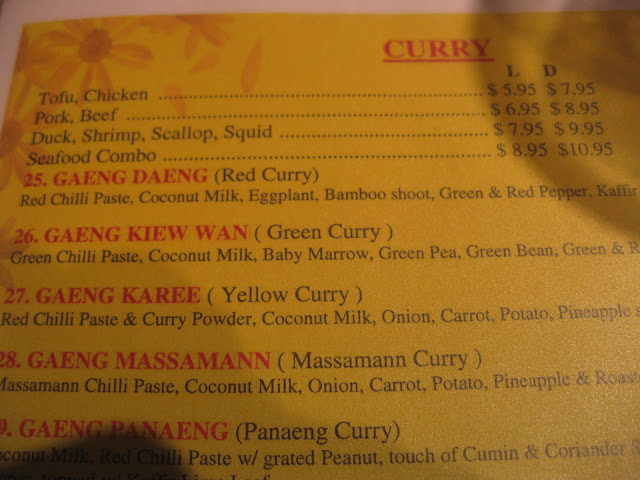 I should have ordered the baby marrow, since my curry was terrible. (I'm thinking to myself, 'do I really want to go that far?' and deciding that yes, yes I do. Terrible.) It was like when I used to make curry at home and didn't know how to make it good. Pasty, thick, too spicy, and not enough coconut milk to open up the curry flavors. 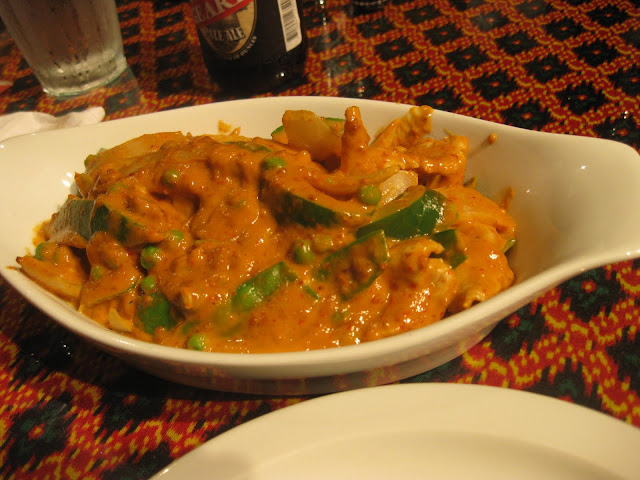 And I'm not entirely sure that the meat was actually pork. It had too many 'the other white meat,' characteristics for me to be sure it was derived from swine. 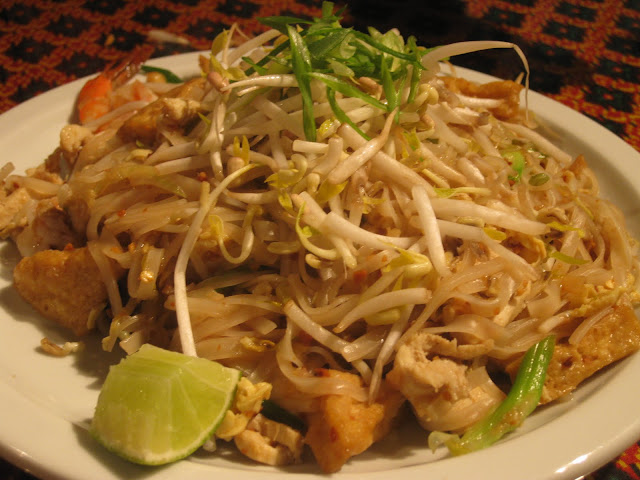 Dawn's pad thai was nothing special, other than in its quantity. Adam was excited that it came with lime, but not even a squirt of its juice could save it.

The most entertaining dish of the evening, was M's. 'bird's nest.' He attempted to ask the kitchen to create a specialty dish, something the cooks would eat themselves (don't hate us, it was super slow in there). They tried to get more information out of him as to his preferences, but he really wanted to leave everything to them. 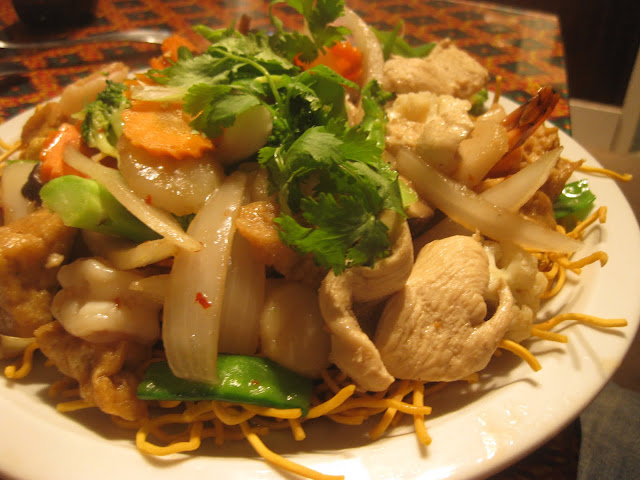 Et voila, the bird's nest. We found fried tofu, chicken, shrimp, assorted veggies, fried lo mein noodles, and some plum dipping sauce. Not the most congruous dish any of us had had, but we appreciated the willingness to humor us. (Or maybe they were just messing with him?)

So I would return to Chiang Mai Two for lunch, specifically for the beef salad. I would order it with 2 stars of heat to get my blood moving. It seems to be the most (only?) vibrant dish coming out of the new kitchen on the block.