If you haven't gathered this before, I'm pretty broke (AmeriCorps volunteer, you see). So when I decided I can afford to go out to eat, I take that shit seriously. I deliberate for a LONG time. I don't want to feel like my scant dollars (I won't say hard-earned, ha) are wasted on overpriced, bad, or even mediocre food. And in this culinary obsessed town, you'd think that wouldn't be such a tall order.

So when I decided to have a women's night out (what's with "girls night"? I'm not 12!) with my fabulous roommates at Vignola, I thought I was safe. I'd heard good things about their appetizers, but that their service frequently left something to be desired (namely, faster service). But I'm pretty low maintenance- as long as I have a drink, I don't mind whatever else they throw at me. So I chose Vignola in the hopes of sharing some of their great Italian appetizers with my roommates.

But I was not all that impressed with Vignola. At first, I was hopeful, as I was expecting a more rustic, old-world Italian feel to the restaurant. I was pleased to see that Vignola attempts to strike a more modern chord with intriguing wine bottle light fixtures over the bar and a combo of exposed brick, beams and ventilation. 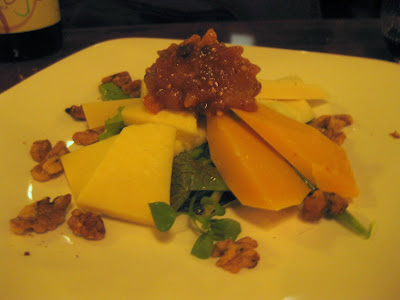 Our waitress was friendly and engaging and assured us that if we ordered everything all at once, she would ensure that our food's arrival would be well-timed. So we started with a bottle of wine and a cheese course. I was dismayed (again with the brokeness) to see that most of their bottles start in the mid $30s. I mean, throw a broke girl a bone. Most places do! But whatever, since we were splitting it, it's just a small quibble.

Our cheese course came pretty quickly, as did some fresh herbed focaccia bread and individual plates of olive oil for dipping. However, after we quickly devoured our cheese, we waited... and waited... for our next course. To the point where even I noticed that the food hadn't come (like I said, as long as my glass is full...). C. had to flag down another server and beg her for some more bread. We were dismayed to encounter large gaps in the timing of our meal after our server had assured us that we were in the hands of a master. 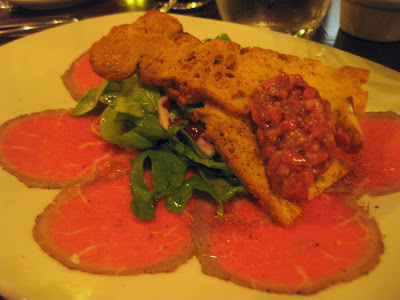 Finally, A. and I split the beef carpaccio and Kobe beef tartar, being the meat eaters that we are, while C. snacked on her pile of greens. Our tartar and carpaccio were both good, especially with the accompaniments of mustard, pickles, and crispy toasts. C. was befuddled by her torn up bits of Boston lettuce with a sprinkling of cheese- as Adam of Appetite Portland said, "That was a nice heap of greens — I just wouldn’t call it a salad." 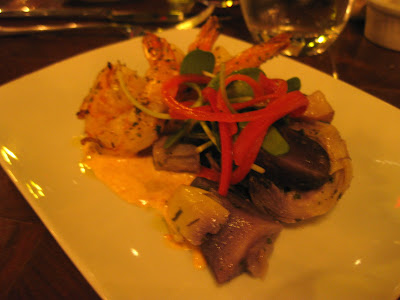 OK, as for this next course, I'm just gonna say it: It was a hot mess. A. can defend it in the comments if she so chooses, but I thought it was all over the place. Three grilled shrimp came over tarragon marinated artichokes and fingerling potatoes, with mini greens, roasted red peppers, and some sort of aoili. I was surprised to find the accompaniments were cold, as I was expecting them to be warm. The shrimp were cooked well, but the dish had no consistent flavor profile, just a bunch of incongruous ingredients. 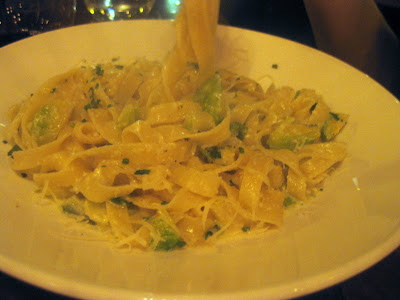 C. asked for a vegetarian pasta dish, as, other than pizza, there's no vegetarian entree. The kitchen offered to tweak a pancetta, Brussels sprouts, and linguine in cream sauce dish for her. However, she wasn't too impressed with the final product. I don't have much of an opinion on how far a kitchen should go to accommodate special diets, but it seems to me that an Italian joint could do a little more to provide vegetarian options. 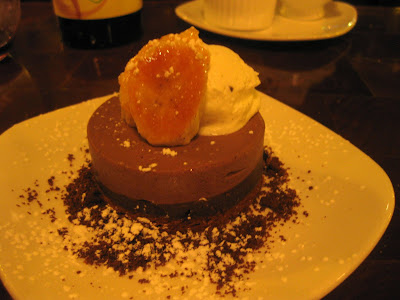 After dessert, almost everything was forgiven though. We had a chocolate mousse topped with whipped cream and caramelized bananas. The mousse was rich but light, and the sugary crust on the bananas gave them a nice crunch.

Since I liked the atmosphere at Vignola so much, I think I'll relegate it to the category of 'drinks and apps at the bar' from now on. I think that's a role that it will fill well, just as long as I don't need to eat and leave in a hurry.