Time for Thai-O-Rama, Round 5... and still no great Thai food yet. I figure by the time this project is over we bloggers will have eaten hundreds of dollars of Thai food and *maybe, just maybe* 15% of it good. I haven't seen that 15% yet, hence the hedging. 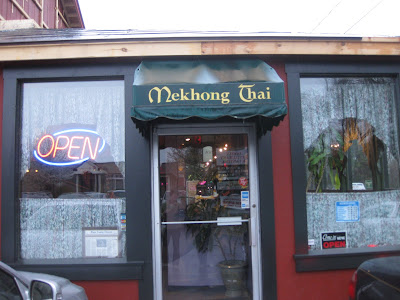 But away we go... Mekhong Thai is located on Forest Avenue, right next to Haggarty's and The Fisherman's Net in a large red building that looks like it also used to house a Mexican restaurant. M. and I went in for dinner on a Friday night and were greeted by friendly servers and hostesses. Given a table in the upper dining level, I decided the decor made it feel like you were eating in someone's Grandma's house. Some grandmas make good food, so maybe this was a promising sign. 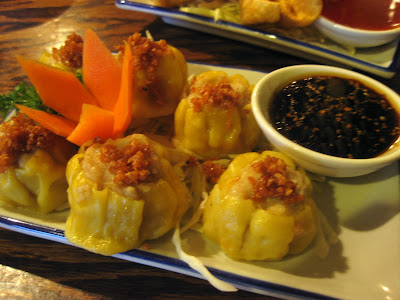 I heard the Thai dumplings were good, so we started with an order of them and M.'s favorite, crab rangoons (both $5.95). The dumplings were bland and a strange chemically flavor in the ginger dipping sauce didn't rescue them. 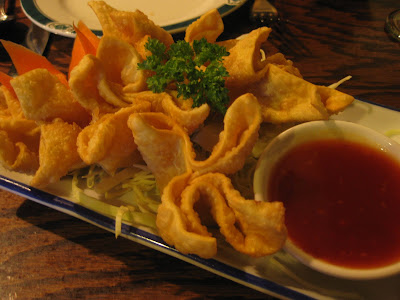 The crab rangoons were good, though it's hard to screw up fried food. The wonton wrappers were not too tough and chewy, and while there was no discernible crab taste in the filling, that's par for the course for crab rangoons. The spicy cocktail sauce, however, was not a welcome addition. It tasted like chicken chili sauce mixed with ketchup, and it just made me wish for some plain chicken chili sauce. 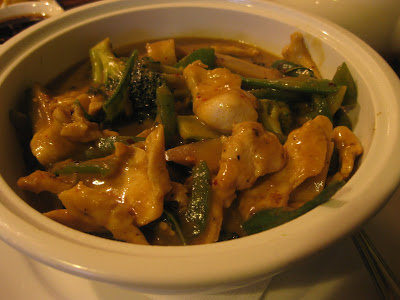 For my entree, I ordered green curry (from an oddly small selection of curry types) with chicken and 3 stars of heat ($11.95). The portion was large, it certainly was spicy (thanks for taking me seriously!), and it had lots of vegetables that I love: snow peas, green beans, onions, and broccoli. But the curry itself was pasty and thick- I prefer my curries on the sweeter side (I would have ordered Panang if they'd had it) and thinner. A thick curry just made for a weird mouthfeel. 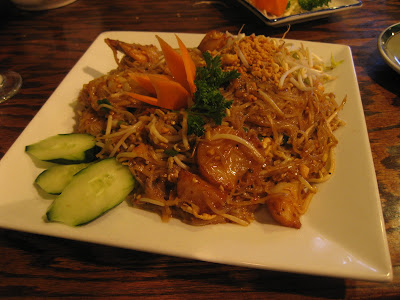 M. had the seafood Pad Thai ($13.95) and he enjoyed it- there was a lot of seafood: shrimp, octopus, and scallops. Again, it was spicy, but would have benefited from a squeeze of lime, whereas none was offered.

Overall, Mekhong Thai does not make my list of go-to places for Thai food in Portland. After we ordered, I noticed a table stand that was their Pho menu. Maybe I'll include it in my tour of Portland's Pho dishes, but I will keep searching for the best Thai in Portland.