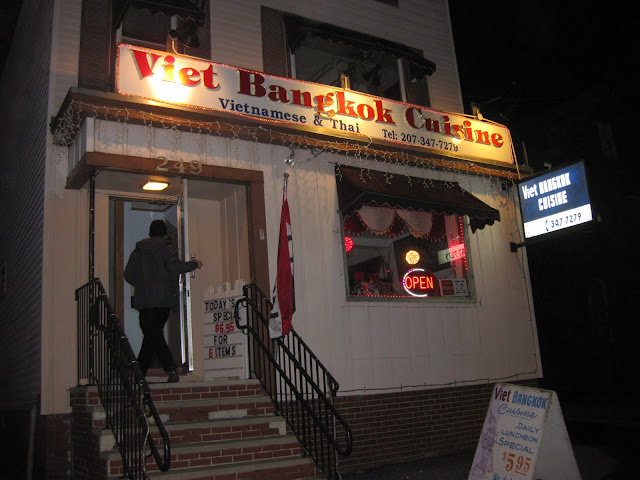 This time around we ate at Viet Bangkok Cuisine, which like a lot of Thai restaurants, is pretty weird inside! Their decor is summed up by the giant lobster with light-up eyes.

They sat all 7 of us without a reservation, so that was pretty cool... but we were the only ones in there at 7pm on a Friday night, so we had plenty of room. 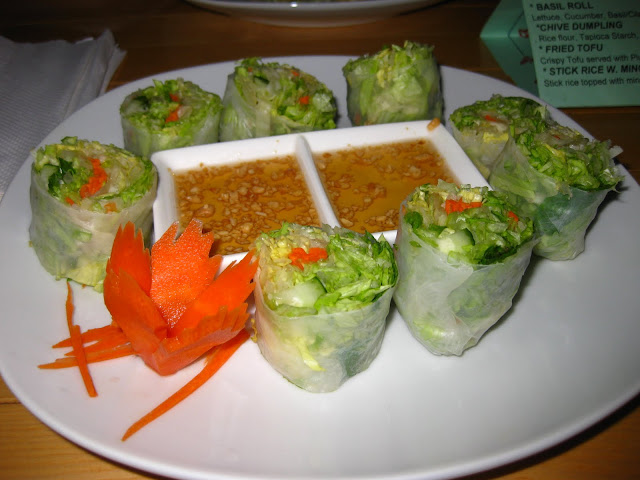 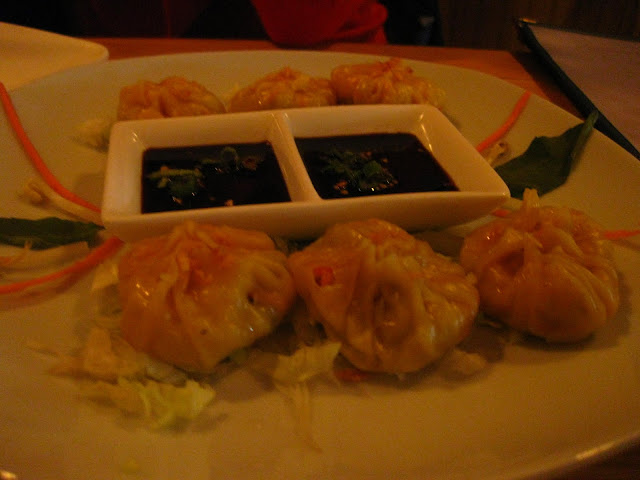 I was super excited to try pho, because I'd never had it before and I heard it was really good at Viet Bangkok. While I don't have anything to compare this pho to, I can say that I loved it! I really love dishes that come with a side of things to garnish your food with. We got a plate of bean sprouts, limes, sliced jalapenos, and fresh Thai basil. 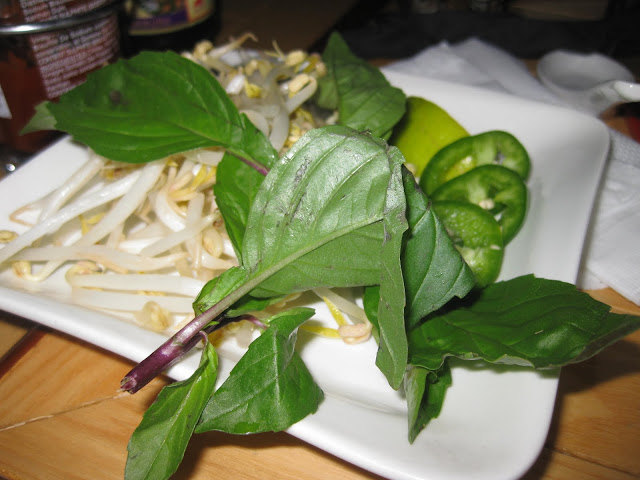 There were thin slices of beef, skinny rice noodles, thinly sliced onions, and floaty green onions. Deeeelicious. I slurped and spooned up all that pho really quickly. 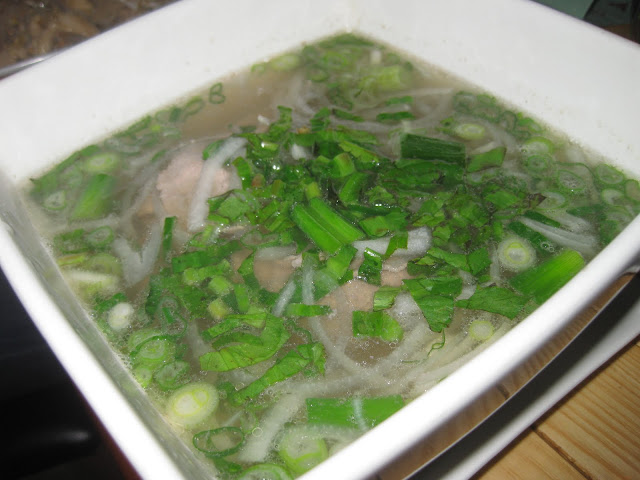 The best part of the pho was that I was splitting it with my friend Elizabeth of Strawberries in Paris. The waitress brought us two bowls and didn't seem interested in facilitating the splitting of the pho. So Elizabeth took matters into her own hands, stood up, and poured that pho! So awesome. 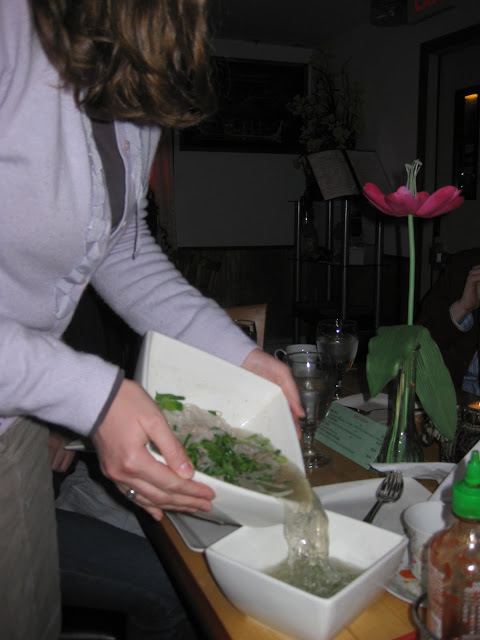 Look at her go!

So then I began harassing people to take pictures of the food for me... here's Roomie A's Pad Thai (the house specialty- they claim it's famous!). I had a bite and it was nice and juicy, but had an odd sweetness... 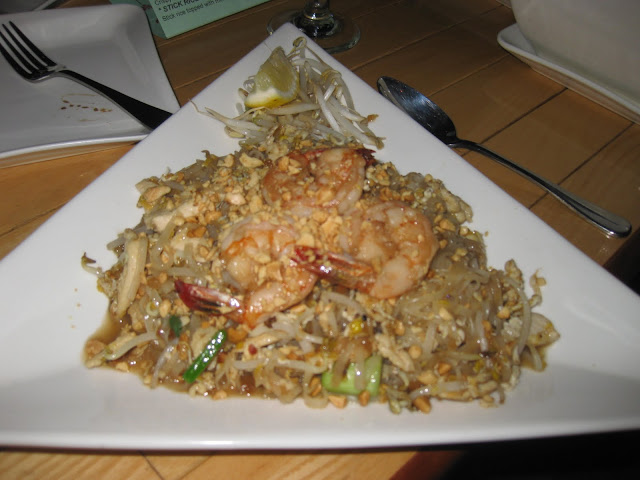 Side note: it's really strange that they choose to serve the dishes as they come up in the kitchen, one by one. It's like there's one person back there, and s/he just works through the order, making one dish at a time. Fortunately I ordered first! But I felt bad for M. who was served last and just had to watch us all eat for a while. 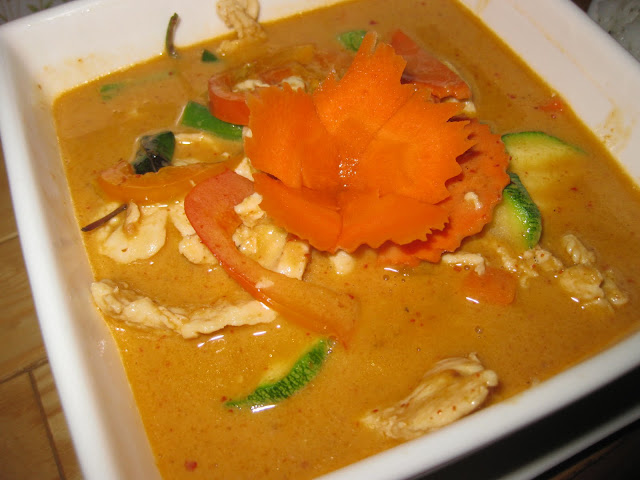 I had the red curry with chicken. Again, an odd sweetness permeated this dish. But I loved how it had lots of vegetables not otherwise usually included in Thai curry, like snow peas, zucchini, green beans. The curry was pretty spicy, which I didn't realize at first, but I was definitely sweating by the end. And I had a lot to take home as leftovers, which is key. 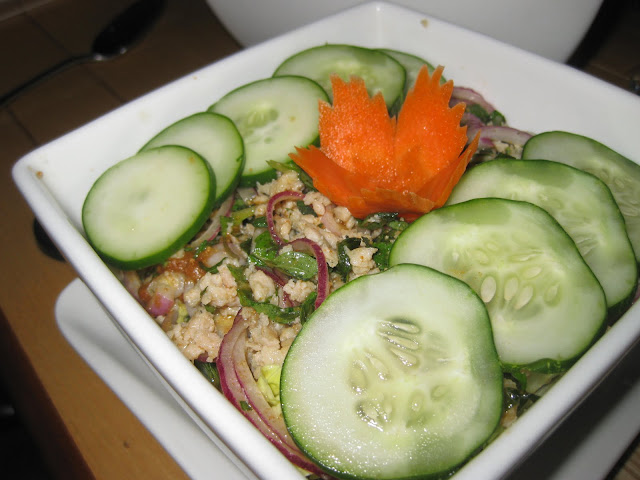 Elizabeth had the Larb Gai, which was a pretty good, juicy version. But the ground rice powder gave the dish an unpleasant grittiness.

So! All in all, there was a lot of weirdness, but the food was good (pho is best!). I'm not handing out any awards yet, but I don't see this place being in the top 3. The prices are better than Sala Thai, the ambiance is super weird (hey, maybe you're into that), and the food is OK. Grade: B